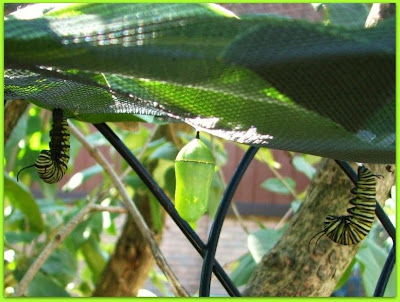 
The four Monarch butterfly caterpillars I brought home last week have done well and one of them changed to the chrysalis form a couple of days ago. Two others assumed the hanging position yesterday afternoon and one smaller one is still eating milkweed leaves.

A couple of years ago, Bev of Burning Silo posted a movie of a caterpillar turning into a chrysalis. I was hoping to see this happen today, Labour Day, as I am not working. The caterpillars appeared to be hanging still, but if you looked at them closely, they were working hard. There were rhythmic contractions of their bodies, not unlike labour contractions of birth. 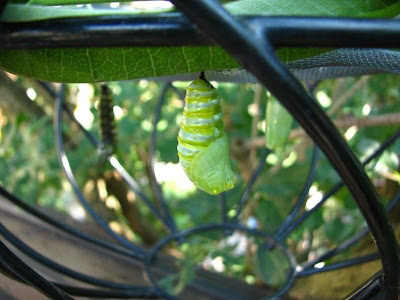 Brand new chrysalis, still in development
I waited on the deck for about ninety minutes today which was not hard because it is gorgeous out there. All of a sudden, one of the caterpillars straightened out and started vigorously shedding its skin. I was able to catch it on a video recording with my camera. The clip is about five minutes long. About half an hour later the other caterpillar did the same and this time The Becka got to see it. Now I have three beautiful green gems hanging from the screen.

Once again, I hope to see one of them emerge as a butterfly in about two weeks or so.