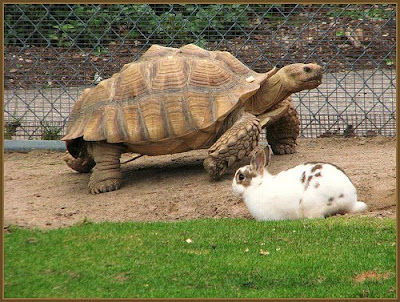 A local city park we visit has a small zoo and one pen features a South African tortoise with a number of rabbits and guinea pigs. The sign on the fence reads "The Tortoise and Hare". We watched the tortoise doing deliberate laps around the perimeter of the enclosure while the rabbits (not hares) burrowed and nibbled on greens.

When it comes to technology, I am a tortoise with the newer toys. I have never had an iPod even though there are a number of them floating around the house. Our daughters have received free iPods for opening bank accounts and buying computers but I have never understood the appeal of walking about with headphones on. I like to listen to the sounds of nature on my walks and think earphones are unsafe in a car. (Do you notice the people who do not hear an approaching siren on the roadway?) One of my patients who is in her late 70's was listening to an iPod at her bedside recently. Her husband had programmed it for her and I was very impressed with their youthful attitude. 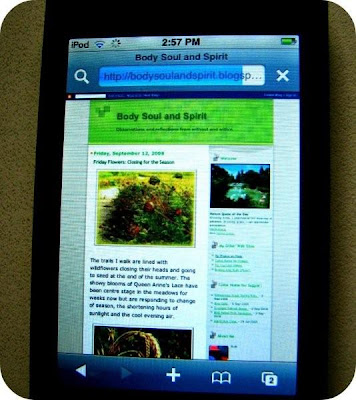 I purchased a new laptop a year and a half ago with Windows Vista OS installed. The computer is not compatible with the printer that came with it, nor my relatively new Canon scanner, even though I have installed upgraded software. I have to reinstall my printer software every time I use the printer. Recently the computer has decided to crash rather frequently...click...black screen...all is lost. I have logged over 200 such crashes in the past few weeks with as many as eight in a row during rebooting. We used Apple computers until I purchased my first PC laptop for work in 2000. I no longer need a laptop since I resigned from my community job, so it is time to return to Apple.

We welcomed two new MacBooks into the family last week and each came with a bonus iPod Touch. I can check my email and browse the internet wherever there is a WiFi signal and do not need to subscribe to a service. I am able to add pictures, videos and more songs than I can listen to. I have decided I really like this little gadget now that it is personalized with my favourite images and music. Mind you, The Becka had to provide some coaching assistance with the set up. The unit comes without an instruction booklet and says only to "plug into your computer and follow the directions on the screen". Well those directions were rather vague to say the least. 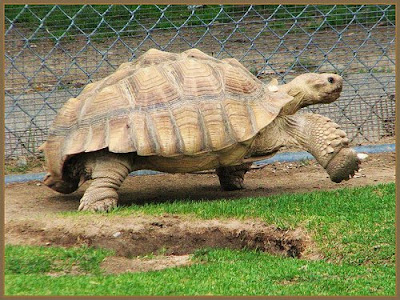 This tortoise is on the move! Maybe I will even catch up with my children one of these days. Maybe not, but I am still in the race.
Posted by Ruth at 7:21 am

Email ThisBlogThis!Share to TwitterShare to FacebookShare to Pinterest
Labels: family, Music, this and that