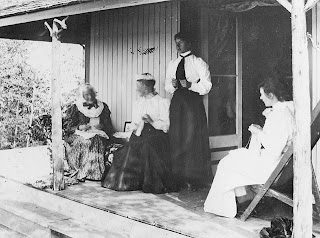 Catherine Parr Traill on far left, 1899
I met a new blogger today, Mary from Ontario, Canada. In reading her recent posts, I found out that October is Women's History Month in Canada. I had been saving this post for a few weeks and finally found a focus for it. Grandma was an avid collector of books written by Canadian authors. I now have her books and have shared the volume of poems by Pauline Johnson in a previous entry. I have the books written by Nellie McClung and the classic pioneer volume, Roughing it in the Bush by Susannah Moodie.

Susannah Moodie and her sister, Catherine Parr Traill moved to Canada with their Scottish husbands in 1832. They were professional writers before their marriages and they recorded their experiences as pioneers in several books that are now important volumes of Canadian literary history. These women were truly remarkable! They had a genteel British upbringing, but tackled the tough life in the Canadian bush with energy and enthusiasm. They had a keen interest in the natural environment and Catherine became a respected botanist. The picture of the goldfinches on the left was drawn by Susannah Moodie.

We recently had an elderly patient on our unit who was a great-granddaughter of Catherine Parr Traill. She was always quick to tell us about her famous family and counted herself a naturalist as well. As she became stronger, she loved to walk outdoors on the grounds of the hospital, looking at birds and flowers. We allowed her to do this during her therapy sessions as often as possible and she had many stories to tell from the past. I printed her family tree from the internet and she was delighted to tell me about her various family members. One of her favourite stories was about being "treed by a bear" when berry picking with three maiden aunts. She recognized the cottage in the first picture, and while she never met Catherine Parr Traill, she knew the aunts in the photo. It was delightful to meet someone connected so closely with notable women of Canadian history! 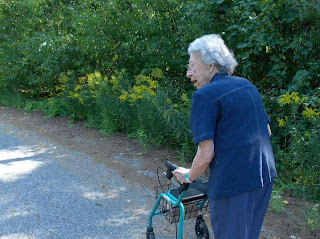 The website of the Library and Archives, Canada has a very interesting section on these two women. Here is a list of some of their books.

Sketches from Nature; or, Hints to Juvenile Naturalists
The Backwoods of Canada
Canadian Wild Flowers
Studies of Plant Life in Canada
Pearls and Pebbles: Notes of an Old Naturalist

Roughing It in the Bush
Life in the Clearings
Patriotic Songs