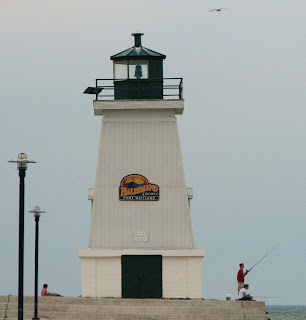 I have lived near the Great Lakes for most of my life. When I lived in Toronto, Lake Ontario was often in view and I have travelled the length of this lake's north shore often. I have seen some of the south shore in New York State as well. We spent many summer weekends and holidays on the shores of Lake Huron and have travelled to the Michigan side of this lake several times. My husband and I drove along the north shore of Lake Superior one summer as far as Thunder Bay Ontario. I have never seen Lake Michigan and realized to my surprise this summer that I had never seen Lake Erie. My husband has fished on this lake frequently, but I do not enjoy being 10 to 20 miles from shore in a smallish boat.

The Grand River winds through our region and eventually empties into Lake Erie at Port Maitland near Dunnville. One weekend at the end of this summer, we drove along the Grand River Scenic Parkway which starts south of Brantford, all the way to the lake. I will describe the Grand River later, but for now, here is a poem by Pauline Johnson, the native Canadian poet I wrote about previously here. She lived on the banks of the Grand River and undoubtedly stood here where the river meets the lake.

And I waved across the lake to my blogging friends on the south shores.

Email ThisBlogThis!Share to TwitterShare to FacebookShare to Pinterest
Labels: people and places, Poetry