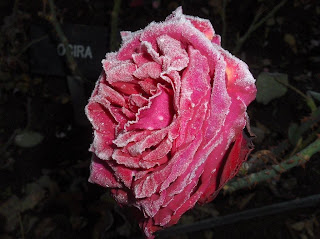 Yesterday we had our first ground frost of autumn, one that is sure to end the growing season for this year. I took these pictures in the rose garden at the hospital just as the sun was rising. We have enjoyed the roses here since June. I found a chart with the average frost dates for many Canadian communities. Our average first fall frost is on September 29th so this frost is one month overdue.

One cannot say that is true just because one year is warmer than average. Last fall was exceptionally wet and cool and we had frost in the middle of September. But there is no doubt that this summer has been hot and dry for much of eastern North America. I did some birding this weekend around one of the many kettle lakes in our area, lakes filled with water from retreating glaciers of the Ice Age. Global warming has been going on for a long time. Our large ecological footprints may be accelerating a natural phenomena.

Who knows for sure??

In August 2007, a Canadian blogger, Steve McIntyre, "turned up an error in the math NASA used to determine historic temperatures, forcing the agency to own up to an embarrassing mistake." (read the full article here)

The article discusses the top ten hottest years on record and I quote,

Doomsday prophets are popular with the press and politicians can use the fear generated by the media to gain power. I am not arguing for or against global warming, but objective observations and analytical thinking about what is presented to us by the media is essential on any topic. 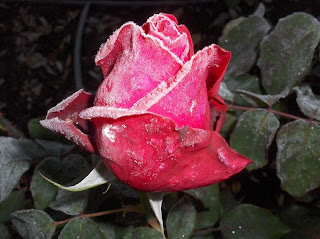