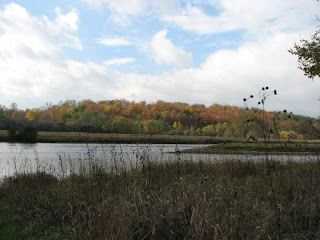 On Saturday I walked a trail I had not been on since ragweed season in August. (This is the trail of the Giant Ragweed) It was a very windy day and generally overcast until noon. I had my camera in the case most of the time and just used my binoculars. There were a number of birds in the low berry producing shrubs along the river bank. I stood in one area and was surrounded by many different species including chickadees, downy woodpeckers, robins, cardinals, yellow rumped warblers, golden-crowned kinglets, a hermit thrush, fox sparrow, white-throated sparrows, and a group of tree swallows. I believe I saw so many birds because I was not concentrating on taking pictures. 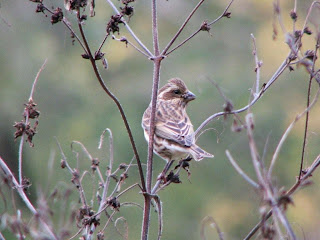 The trail opens up to a flood plain where a small creek, full of minnows, empties into the Grand River. Many thistles have grown here and the grasses and wildflowers have gone to seed. In this area there were mallards, geese, and gulls, one GB heron, a kingfisher (being hotly pursued by a gull), and two black-crowned night herons! In the thistles was a flock of LBJs and I did take out my camera so I could ID them later. I had difficulty finding a matching sparrow in my guide books and then started looking at female birds. I had taken pictures of female purple finches, a bird I have never seen before. They are supposed to be common here, but all I see are house finches. Where were the bright coloured males? I know I would have recognized them. 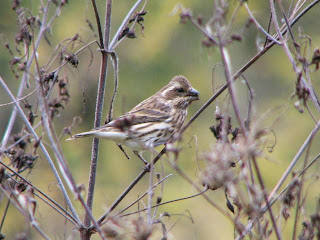 When I got home, Becka informed me that the AMC channel was featuring Alfred Hitchcock movies for the entire day. The Birds was going to be on in the evening.

I was twelve years old when I started babysitting for neighbours. I was easily frightened by the thought of intruders and had never been exposed to horror or suspense in movies. In fact, we never had a TV at home when I was growing up. After my young charges were in bed, I started to watch The Birds and was quickly frozen in horror to my chair. The images of the bird attacks gave me nightmares for a long time. 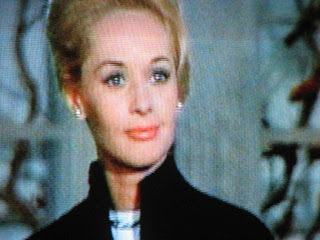 Tippi Hedren in The Birds

When we moved to our current home, we had a problem with starlings coming down our chimney into the house. I remember coming home one day and having a starling fly up at me from behind the kitchen table. I ran out of the house and called for help from a neighbour's home. The effects of the movie lived on in me.

Well, my very media-savvy daughter told me that Alfred Hitchcock had a message for his audience in The Birds. It could be full of Cold War imagery or be a commentary on human abuse of birds, from caging them to eating them. I should watch it to see if it was still scary. 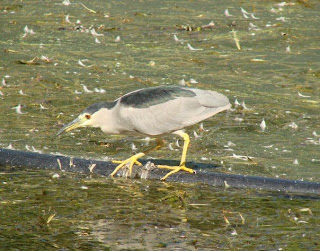 Well, I did watch it and it didn't scare me this time. But what would it be like if the birds rose up against us because of the way some people treat them and their habitat? I thought of the stream where the Black-crowned Night Herons had been and the grocery cart and garbage dumped there by thoughtless people. Few of us would tolerate someone doing that to our home. 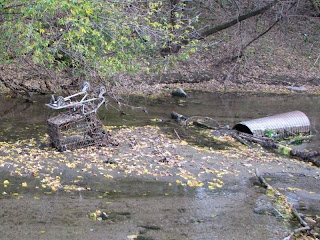 Home of the Black-crowned Night Heron at Preston

Thankfully, there are many people who care about the environment. We just have to get the message to some more of the others.
Posted by Ruth at 6:48 pm