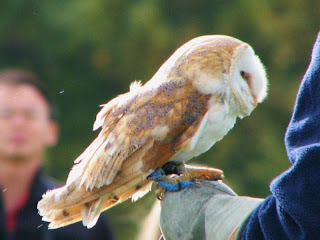 Barn Owl
At the opening of the Huron Natural Area this past weekend, the Canadian Raptor Conservancy held a demonstration. I visited a raptor rehabilitation centre at the Mountsberg Conservation Area earlier this year, but the birds were caged and only one Barn Owl made an appearance at a small show. 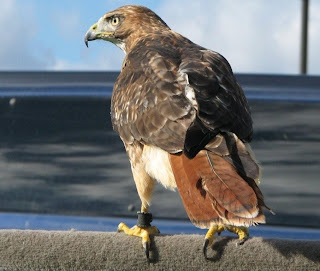 The birds in this demonstration were not injured or rescued, but had been captive bred. The wind was strong and gusty, but the hawks and falcons were able to do some free flying. James Cowan is the director of the conservancy and he did the demonstration with some help from his young son. It was an educational and entertaining show and I enjoyed seeing these beautiful birds at close range. 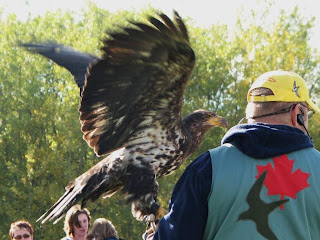 Earlier that morning I met a birder along the Grand River who was eager to tell me that he had just seen an immature Bald Eagle in a tree on the opposite bank with his scope. Bald Eagles do not nest in our region, but increasing numbers of them are wintering along the river. This man was part of a group that monitors their movements and reports sightings to the Ministry of Natural Resources. James Cowan showed the audience a juvenile male Bald Eagle. I really hope to see one this winter. 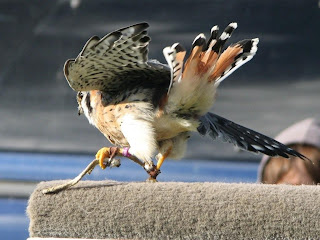 The American Kestrel is a very beautiful falcon. I remember it being called a Sparrow Hawk, but it is not a hawk and has been renamed. The flight feathers are brilliant. We had one in our neighbourhood this spring, but I have not seen any around over the summer. 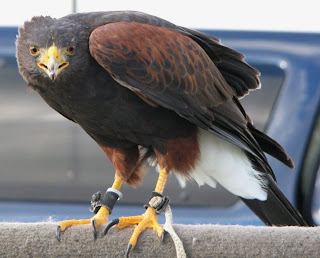 This last bird is a veteran and has starred in several Hollywood movies. The Harris Hawk is not found in Canada, but is native to the American south-west and Mexico. This bird was a seasoned performer. But an unexpected gust of wind carried him off into a bush in an adjacent property. The director's young son went running across the field and over a fence and coaxed the bird back with some meat. 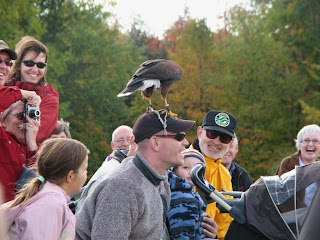 The Harris Hawk sat on the head of this young father in the audience. Apparently, their stance is very gentle and light as they are accustomed to standing on spiny cactus plants.

The shows were repeated hourly throughout the afternoon and many children and adults had the opportunity to learn about birds of prey. After the show, someone pointed out a Sharp-shinned Hawk overhead in pursuit of a small bird. That hunting display was for real, and the hawk did not gain a meal that time. The presence of these birds of prey is an indicator of the health of the local environment. The Barn Owl is now extirpated in Ontario due to loss of habitat. It is unable to hunt for small rodents in fields that are densely planted with corn and soybeans. The more we see and learn about these magnificent birds, the more we should care about preserving their habitats.
Posted by Ruth at 8:04 pm