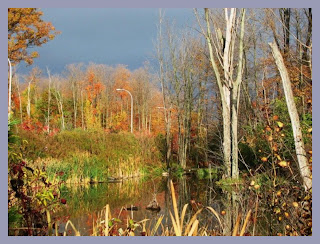 Sun and cloud at the swamp

I started my day at the dentist's office having an old filling replaced. I am not a relaxed dental patient and received two shots of Novocaine so the dentist did not have to deal with my pain reactions. When I left, my face was half paralyzed leaving me lopsided and drooling from the mouth. I had to put in some time before I returned to work, preferably somewhere where people would not be around to stare at me.

So I went to the swamp.

This morning there was a light frost on the rooftops, the first frost I have noticed in this strangely warm fall season. We still have not had a killer frost. The sky was full of big grey clouds and the sun broke through occasionally creating dramatic lighting. 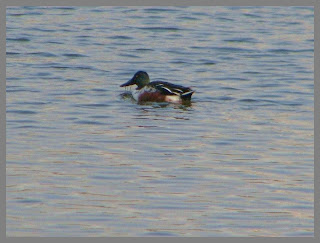 The swamp was missing some old regulars like the Great Blue Herons and the Kingfishers. The Wood Ducks and Northern Pintails have moved on and the regular Canada Geese and Mallards are still around. The bushes were full of Goldfinches and Juncos, the latter having returned here earlier this month. I scanned the water with my binoculars and notice some strange beaks. From a distance, these ducks could be mistaken for Mallards, but up close the difference was clear. They were far out in the swamp, but my pictures were good enough to make an ID. 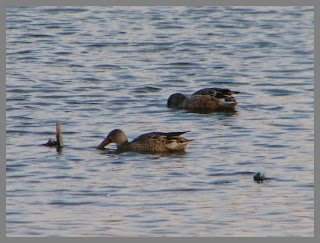 I left the swamp once I was able to close my mouth and visited a nursing home nearby. I could identify with my patients who had suffered strokes and had facial weakness and swallowing difficulties. Going to the dentist was very rewarding;- a repaired tooth and a new bird for my list!
Posted by Ruth at 7:09 pm