Friday Flowers: On the Street... 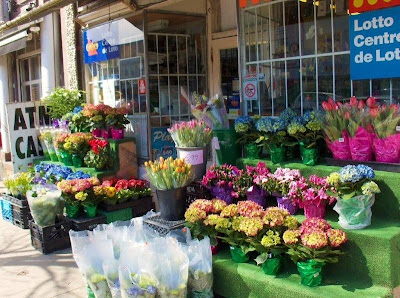 I lived in Toronto for six or seven years of my childhood and adolescence moving away from the big city just before my sixteenth birthday. My friend Lesley and I spent many Saturdays on the subway system, exploring the downtown, riding the elevator to the top of the Bank of Commerce building (the CN Tower had not yet been built), visiting the Royal Ontario Museum or having lunch at the counter of Eatons Annex. We enjoyed a lot of freedom and our parents did not worry as long as we were home for dinner. Our family's church was located near Danforth Avenue and I was very familiar with the streets in the area. 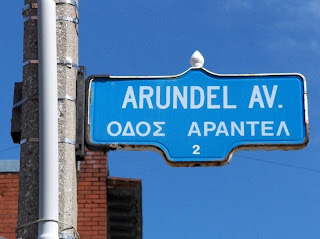 Last weekend, Lesley took Becka and I back to Danforth Avenue, the first time for me in over 30 years. It is now known as GreekTown and small shops and numerous restaurants line both sides of the street. The outdoor patios of the eateries were not yet open for the season, but a few places had moved some of their merchandise into the fresh air and sunshine. The flower shop above featured many bright spring blooms for Easter weekend and the prices were very reasonable. I would have purchased a couple of pots if home had been closer. 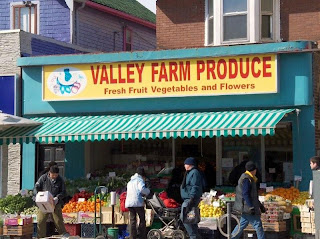 Many cities have languishing cores and their suburbs lack character and community. Toronto has a number of ethnic and eclectic neighbourhoods and shopping districts, each with their own unique flavour. I would love to be able to shop at a small produce store, bakery or variety store within walking distance of my home. My parents grew up in a small town north of Toronto and I lived there for a couple of years too. Grandma shopped at the next door butcher shop and around the corner at Mary's fruit and vegetable store But the main street died when the indoor mall and large grocery stores were built just outside the town core. 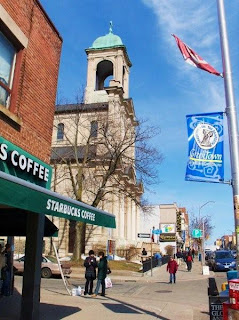 Places like GreekTown are the best part of big cities, here in North America or around the world. Toronto is very clean and safe compared to other cities its size, even more so than when I walked its streets in the 1960's.

What big city neighbourhoods have you enjoyed visiting?
Posted by Ruth at 7:30 am