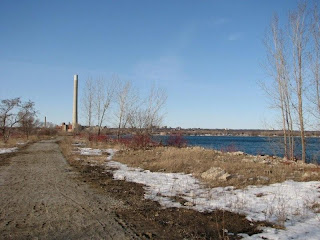 On Easter Saturday, The Becka and I went to Toronto to visit a good friend I have known since we were nine years old. We don't get together often, but when we do, it is as if we have had only a brief pause and the friendship continues as if we had spoken daily. The day was very enjoyable, and after we left in the late afternoon, it was possible to make a brief stop on the way home, taking advantage of our longer evenings. 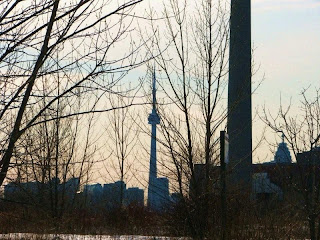 The Leslie Street Spit is a man-made peninsula on the east side of the outer Toronto harbour. The Toronto skyline is just to the west and was silhouetted in the setting sun. The "spit" was originally designed to increase the size of the harbour to accommodate ships using the St. Lawrence Seaway, but a larger harbour was never needed. It then became a place to dump rubble and soil excavated from foundations for buildings built in the city during the 1960's and 70's.

Mother Nature had her way with this barren finger of land and it gradually naturalized becoming home to about 400 varieties of plants and 45 species of nesting birds. There are 290 species of migrating birds that seek shelter in the area. What a wonderful ecological success story! It is now designated an Important Bird Area (IBA) by the Canadian Nature Federation.

The day was cold, but the sun had made the trail surface very muddy. I walked up one section of the park in the half hour before it closed and saw two new birds for my list in this time. 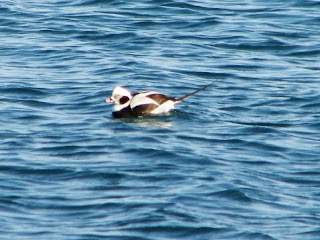 I saw a large group of unusual ducks just off shore enough that I could not see much detail. I took some over-digitally zoomed photos of these Long-tailed ducks, previous known as Oldsquaw. 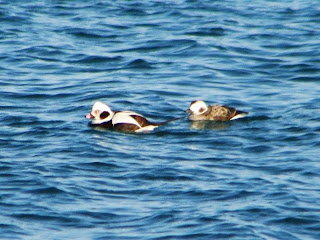 These diving ducks nest in the high Arctic and spend the winters along the coastal areas of the continent. Some do winter on the Great Lakes too and I don't know if these were winter guests or returning migrants. I like their old name but it has probably been deemed politically incorrect. 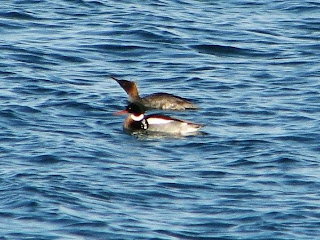 I was also happy to find a pair of Red-breasted Mergansers for the first time among the Buffleheads and Long-tailed ducks. 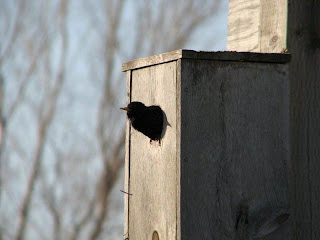 The ever present urban European Starling has benefited from the environment, this one claiming a nesting box that was undoubtedly erected to attract a native bird. But this was the only nuisance bird I saw. The park was even devoid of Canada Geese. (They are likely right in the city waiting to eat up the lawns!)

There are a number of accessible natural areas along the Toronto waterfront and Toronto Island waiting for me to explore when the weather is a little warmer.
Posted by Ruth at 9:40 am