What is happening to the Cedar Waxwings!? 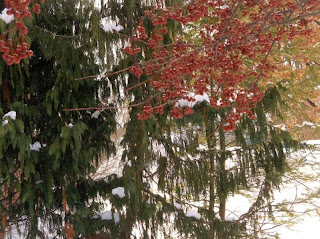 Ornamental Crabapple trees at the hospital
I filled the feeders at hospital today and was disturbed to find three more dead Cedar Waxwings and the remains of another that was likely eaten by our hawk. There was no sign of trauma on the bodies unlike the bird we found last week who had struck the window. There are several ornamental crab apple trees on the hospital grounds which have been loaded with fruit since the fall. The Cedar Waxwings have been feeding here and have made a noticeable dent in the amount of fruit compared to last week. 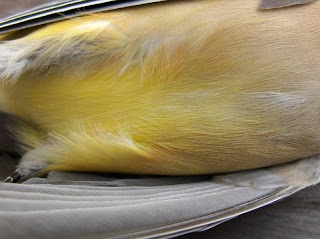 I was checking out possible causes for the dead birds and found this on the Cornell University birding site.

The Cedar Waxwing is vulnerable to alcohol intoxication and death after eating fermented fruit., especially when several warm days follow a cold frost. The cold causes cells in the fruit to burst, and yeast works on the mash converting sugar to alcohol. There are numerous records of birds flying out of control from the effects of alcohol.

If the birds are intoxicated, they are more inclined to hit the windows, or they may just be dropping dead. I don't know how such a problem could be prevented. This appears to be a bumper year for Cedar Waxwings in our area and large flocks have been reported in several areas of the city.