Superhero in the smoking shelter
Our staff and patients must go outdoors in order to have a smoke and the hospital has provided two “bus shelters” for that purpose.

The smokers brave the wind, rain, ice, snow, or summer heat several times a day for their nicotine fix, often getting more exercise than the average person, who may sit in the same place all day eating jelly donuts. (I don’t smoke, nor do I recommend it!..but eating badly and sitting around does a body harm too.)
Off the pulpit, and back to my story...

One of my middle aged patients had a cervical spinal cord injury 30 years ago that has left him with a spastic quadriparesis. He can walk, a stiff, awkward gait, but relies on a wheelchair much of the time. He visits the smoking shelter regularly. A couple of weeks ago, he was there with another patient who had suffered a stroke which had paralyzed his one side. They were minding their own business, when a total stranger drove up, got out of his truck and started harassing them. The verbal exchange escalated and the stranger started physically assaulting my patient. This caused the hemiplegic to move from his wheelchair to attack the perpetrator. Now there were three in the fray. 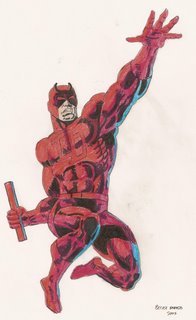 My patient stood up and managed to land a well-aimed kick in the groin of the stranger…so effective that it knocked him out of commission. The police arrived and arrested the deranged man, who had no relationship to the hospital at all. He was admitted for a psychiatric evaluation and then taken to jail.

My patient has many physical problems, and struggles with chronic pain and depression. This incident gave him more of an emotional boost than any of the drugs or psychotherapy he had received. In spite of his disability, he was able to defend himself and his buddy... a quiet and reluctant hero, but nevertheless, one who was very pleased with his efforts and the outcome.

I do not watch many action movies, am not a proponent of vigilante justice, nor do I recommend fighting crazy people, even in self defense. But I do know that the average male dreams of such encounters, his primal instincts barely hidden at all.
So hats off to my disabled superhero for living out his dreams!

(Sketch of Dare Devil by The Becka)
Posted by Ruth at 9:45 pm