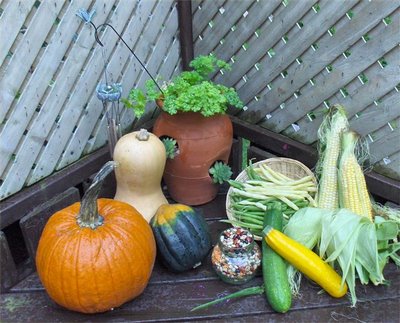 Simmering soup on a soggy day
The rain has pattered steadily on the roof for hours, another very wet day that has been typical of the past four or five weekends. In fact, there has been measurable rainfall every two or three days for the past month. This is a minor inconvenience for me, and an excuse not to clean up my garden, but local farmers are having difficulty harvesting the corn in the very soggy fields. I passed a few farms recently and saw where the harvesters had cut the periphery of the fields in one or two swaths, but had to stop as their heavy machines sank into the mud.
We went out in the country this morning to a small family-owned market where local fresh produce is sold. Our sweet corn will only be available for a couple more weeks, and I wanted some fat, fresh cobs to make one of my favourite fall soups. There were a variety of winter squashes to choose from as well as green and yellow beans.

Native Americans considered corn, beans and squash to be “Three Sisters”. Corn would be planted in a mound and after it had grown a few inches in height, pole beans seeds were placed around it. The corn would support the beans and the beans produced nitrogen in the soil for the corn. Squash was then planted around the beans and the spreading vines acted as a mulch and protector of the beans and corn. These vegetables were staples of the native diet and provided balanced nutrition throughout the winter. The simple soup I make is called “Three Sister Soup”. I clipped the recipe from a magazine several years ago. It was created by chef Bertha Skye of Jackfish Lodge, Saskatchewan, Canada, and won a gold medal in the 1992 Culinary Olympics in Frankfurt.
It brought a spot of yellow sunshine to a dull day.

Made with the three sisters of corn, beans and squash, this traditional Iroquois soup is both healthy and delicious.

In a large pot, bring corn, green beans, squash and potatoes, and five cups of water to a boil. Reduce heat, then cover and simmer for about 10 minutes, or until the vegetables are almost tender. Blend flour with butter and stir into soup; increase heat to medium and cook stirring occasionally for about 5 minutes. Add salt and pepper to taste. Makes 4 to 6 servings.