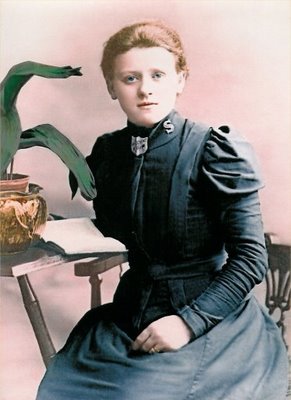 I did not come into a life of privilege, but was born in 1880, one of 22 children, to a working family in Liverpool, England. Most of my mother’s babies did not survive infancy but I grew to adulthood, maturing early, and needing to support myself. My first love died suddenly before our engagement was consummated in marriage.
I then met a man, handsome and worldly, who was from Jamaica and had come to England to find work. We were married and soon I was carrying his child. He arranged for me to move to Jamaica to be close to his family while he worked on the Panama Canal project. Life in the West Indies was so different than life at home. I was often lonely as he was away for extended periods of time.
On January 14, 1907, there was a great earthquake in Jamaica and many people were killed. My daughter Dora was crushed to death and my son John received injuries that would soon claim his life. My daughter Eveline alone survived. Of the four children I had carried only one was left.
British citizens were allowed to return to England by boat soon after the earthquake and the Salvation Army arranged for our passage home. I left without my husband. Perhaps he was killed, perhaps not, but I never saw him again. It was at sea that John died.
The two of us landed in England with nothing and soon afterward I had to put Eveline in an orphanage so I could find work to support us. Young Eveline was a beautiful child, but her racial background was visually apparent and she was the recipient of prejudiced thinking in a WASP culture. I tried hard to protect her from this all of her life.
Later, in 1921, the two of us moved to Canada and settled in the Toronto area working in a biscuit factory to earn our living. While we were in Canada, Eveline fell in love and married a Dutch immigrant in 1928. Through his kindness we had a home and I was able to live with her family until the end of my life. They gave me four grandchildren, who together had 13 great grandchildren, who then had another generation of 28 great-great grandchildren.
Who says life isn’t hard? Who says we cannot rise above our circumstances and move ahead in spite of those hardships? I was a little woman, only 4’10” tall, living in a time when women were not empowered to live out their dreams. I had faith, faith in God and faith in myself that the future could be better. I left behind no money or tangible riches but have left each of you a legacy of strength, courage and determination in the face of adversity.

(Information on Granny Hackett obtained from Family Historian Aunt, Dad, Musical Aunt and Cousin S.) See this post for a picture of the family.
Posted by Ruth at 6:35 am