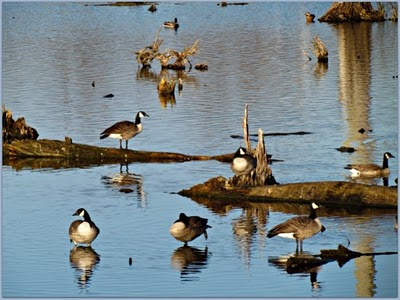 We are enjoying one of the most beautiful early November weeks in my memory with clear, sunny skies and warm temperatures for the season. I spent as much time as possible out of doors on the weekend. Darkness falls very quickly after my work day is over now that we are back on standard time. It is easy to forget the first snowflakes we saw falling early on November 5th. But winter is just around the corner and this late Indian Summer will not last long. The birds know that is true. American Tree Sparrows and Juncos have arrived in large numbers in the past couple of weeks.

Our local wetlands have the usual Canada Geese and Mallard Ducks but if you look closely, winter residents are making an appearance. I forgot my binoculars on this afternoon and it took me while to see the group of Northern Shovelers in the middle of the swamp. They were diving in the shallow water and feeding with their large, sieve-like bills. There was lots of flapping and splashing as a dominant duck displayed in front of the others. 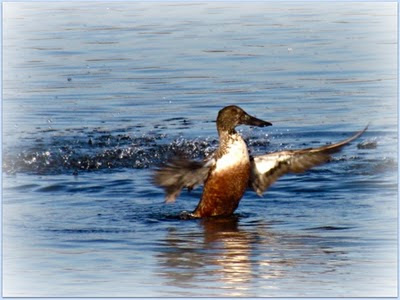 At another storm water pond, a pair of female Ring-necked Ducks were much quieter as they swam with the regular ducks and geese. Plumage variations can confuse me when eclipse males, females and juveniles are around.
It will not be long until Bufflehead, Golden-eye and Merganser ducks will be on local rivers and lakes. Bald Eagles will settle in along open stretches of the Grand River from November until March and the northern shores of Lake Ontario will be home to even more winter water birds.

These birds have come south from their nesting regions to enjoy our "milder winters". Many of my friends who are known as Canadian "Snowbirds" prefer even milder winters in Florida or Arizona.
Posted by Ruth at 9:32 pm