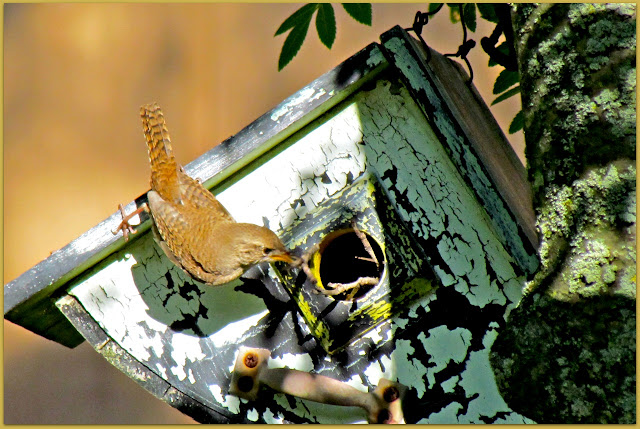 The House Wrens were busy working today and the male spent a lot less time singing. And I spent a lot of time watching them on this beautiful evening.  The bird house is almost full of small twigs. Both of them fussed and tugged at the twigs sticking out of the opening but they could not get them completely inside. 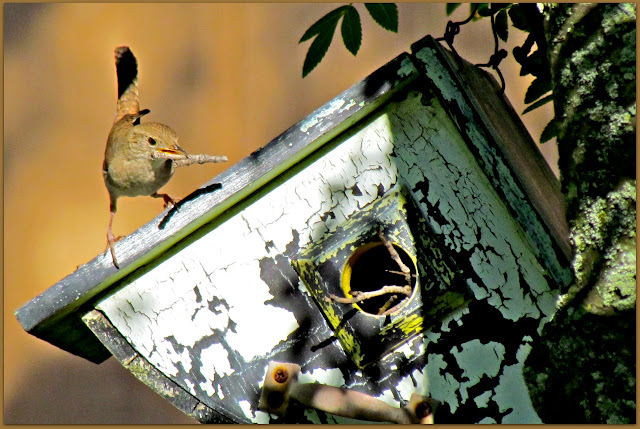 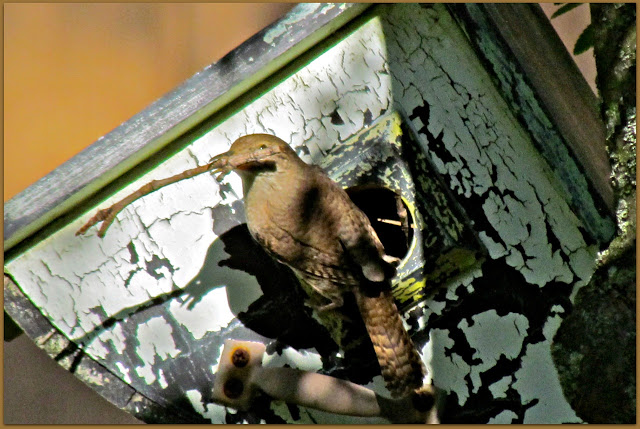 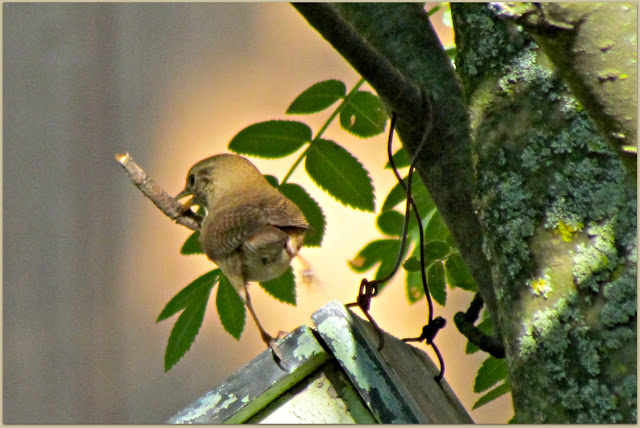 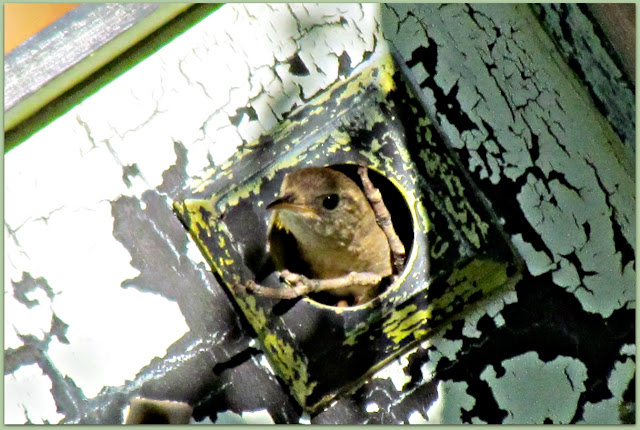 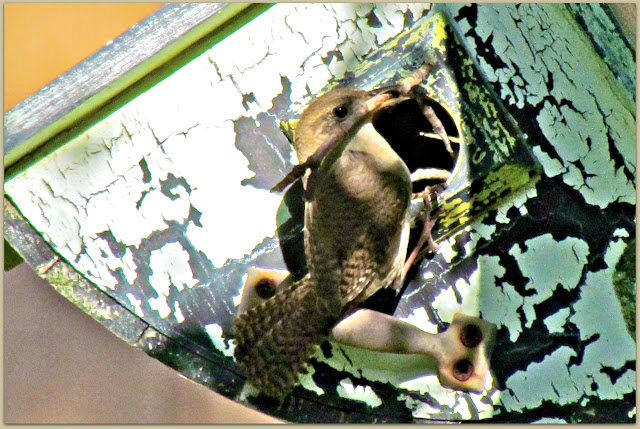 “Easily attracted to wren houses the male arrives first and begins to establish his territory. You'll know he has arrived when you begin hearing him sing from his perches.
As you watch, you'll notice he begins placing sticks into prospective nest holes. He may build as many as twelve different nesting sites. After pairing with a mate, the male takes the female to each of the nesting sites he has begun building.

The female selects the one she likes and begins to rebuild by adding soft materials to the nest before laying eggs. After choosing and rebuilding the nest, the female will lay 5-6 eggs that are white with brown marks. Incubation time last 12-15 days and the young will leave the nest in 16-17 days.”

We have yet to discover if this is the nest the female will choose for laying her eggs. There have been two birds about so I am hopeful. She will have a considerable amount of rebuilding to do to make a comfortable nest with this mishmash of materials. 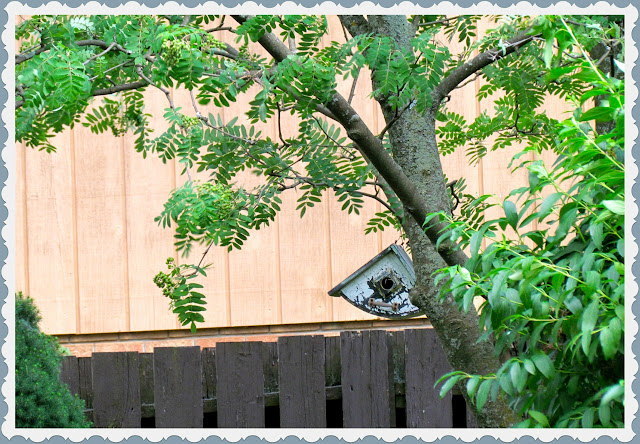 The weathered bird house which hangs from the mountain ash tree in the backyard has been empty for two seasons. A pair of Black-capped Chickadees raised a family here in May 2010 but did not return again. Last evening I heard a House Wren's territorial call and watched it buzz between our maple, lilac and ash trees. This morning there were two Wrens and nest building began in earnest. 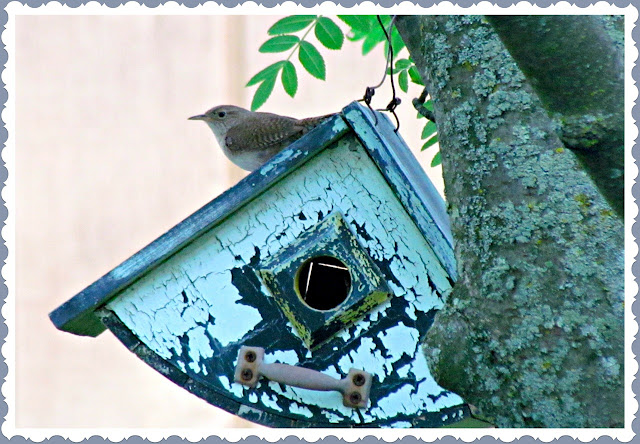 People who want to attract Chickadees and Bluebirds to their bird houses do not care for aggressive Wrens, but there is no competition for this house. I have never seen a House Wren in our yard, in fact, I rarely see them at all unless I hear them on a trail somewhere. This will be the second nest of the season for the Wrens and I am delighted they rented a space here. They can stay for a song. 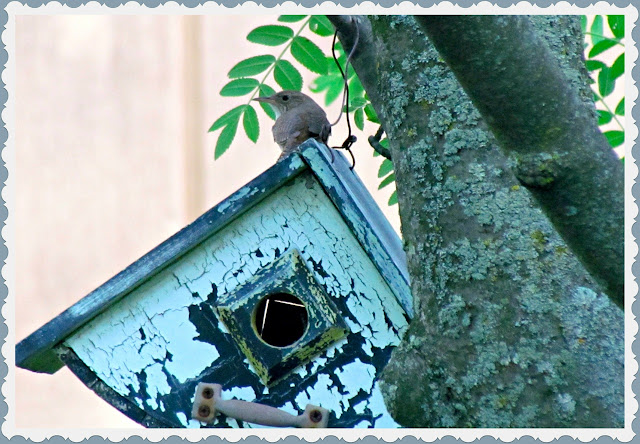 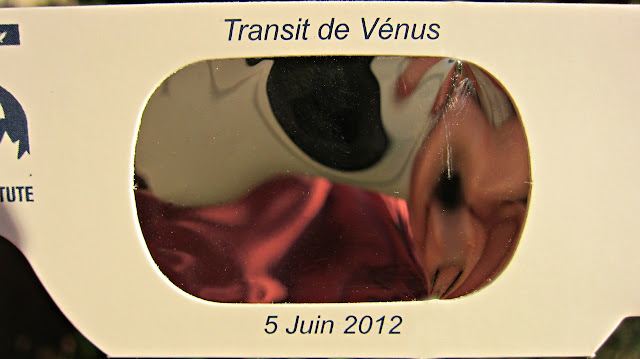 We went to one of our local universities this evening to watch the Transit of Venus under the tutelage of people associated with the Department of Physics and Astronomy in the Faculty of Science. The shadow of Venus traversed the sun many times before people noticed the tiny dot on the blindingly bright sun surface. If everyone was like me, no one would have discovered it yet. The dot is very, very tiny indeed.

We lined up and got our protective eyewear. Some people came prepared with large shadow boxes, modified binoculars, special cameras and telescopes. 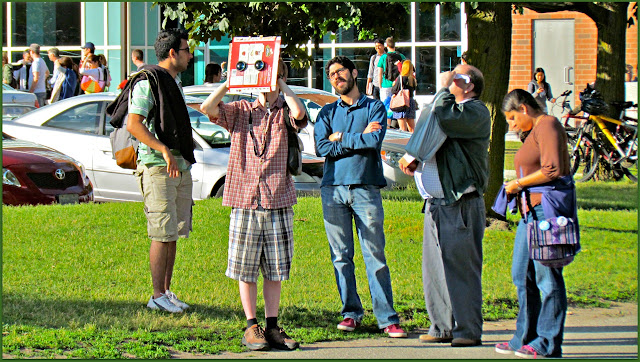 The sky was overcast all afternoon but started to clear as the transit began. The sun hid frequently behind big dark clouds and people waited patiently for it to reappear. 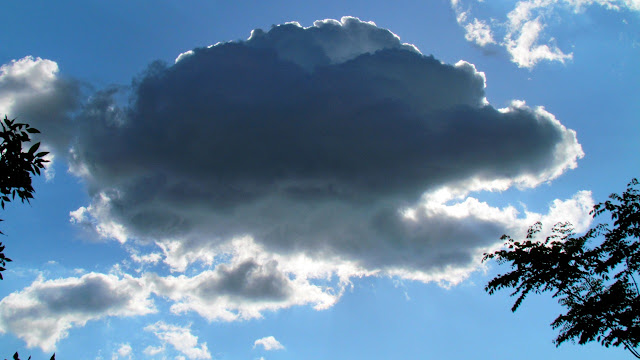 When the sun reappeared, the protective lenses went on and we could see the dot had progressed a few degrees from its one o'clock position toward the centre of the sun. 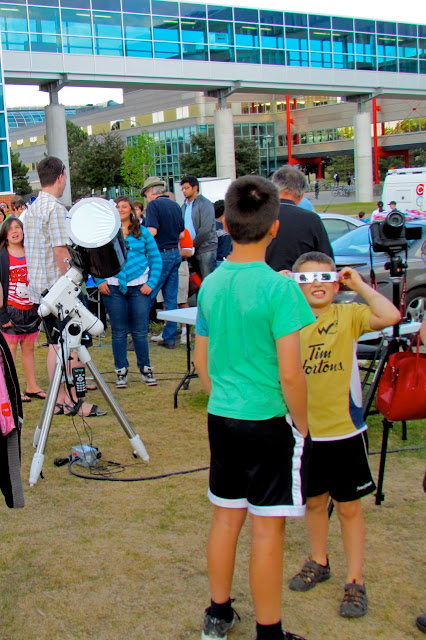 There were a lot of children present for this rare event. Transits come in pairs that are eight years apart, followed alternately by spans of 121 ½ years and 105 ½ years. In the 21st century, the transit pair occurred June 8, 2004, and today, June 5th or 6th depending on your time zone. The next transit is December 2117 and even the youngest baby today is unlikely to see it.

"We are now on the eve of the second transit of a pair, after which there will be no other till the twenty-first century of our era has dawned upon the earth, and the June flowers are blooming in 2004. When the last transit season occurred the intellectual world was awakening from the slumber of ages, and that wondrous scientific activity which has led to our present advanced knowledge was just beginning. What will be the state of science when the next transit season arrives God only knows. Not even our children's children will live to take part in the astronomy of that day. As for ourselves, we have to do with the present ..."

No one could have imagined the changes in science and the world between the last transit and the 21st century. And no one can imagine what the next 105-1/2 years may bring.
Posted by Ruth at 10:52 pm 6 comments: