We drove north of the city this first weekend of autumn to get apples and passed this Old Order Mennonite meeting house. A large funeral service was underway and it was odd to see a car parked between the horses. A row of black cars lined the gravel roadway and at the bend in the road, a large yellow school bus was parked at the edge of a field, undoubtedly hired to bring mourners from another county. The 85 year old man who died had a family service in his home and was then moved to the meeting house for another service and burial in the cemetery. I listened to the congregation sing in four part harmony with no musical instruments as the horses snorted and pawed at the ground outside. 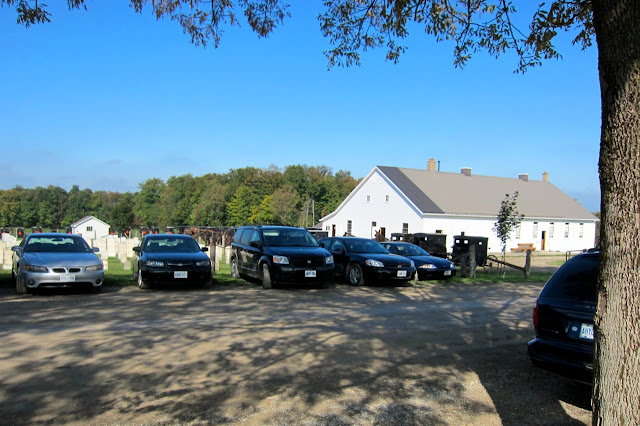 Fall is in the air and the trees are starting to turn to red, orange and gold. Nights are cool and mist rises from the warm ground in the early morning. Apples hang heavy on branches in the orchard and Cortlands, my favourite applesauce variety, are finally available. We carried away pie pumpkins, fresh squash and plums from the farm stand which was decorated with bright pots of mums.


The meadows have their own special fall hues with yellow goldenrod alongside purple and white asters. Monarch butterflies gather on the blossoms as they begin their long journey south. Even with shortening days and the surety of five months of ice and snow ahead, I enjoy autumn more than summer (definitely more than winter). There is certainty in the cycle of seasons...rebirth, growth, harvest and death in a world that seems uncertain economically and politically. Life has its ups and downs but it is a wise person who lets go, patiently sits back and allows things unfold as they should. 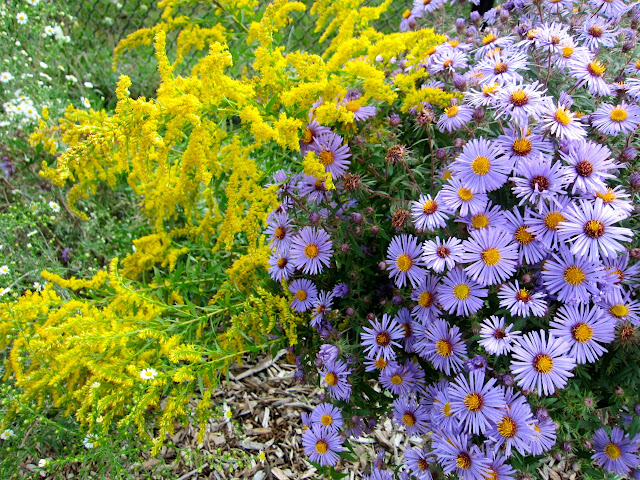 Email ThisBlogThis!Share to TwitterShare to FacebookShare to Pinterest
Labels: Mennonites, seasons of life

On May 25, 2011, Taylor Jones, a 22 year old resident of our city started a new blog on Tumblr called "Dear Photograph". His idea went viral and he has received worldwide recognition for his work and has signed a book deal.  Do take a look at his blog as it is a very interesting blend of old and new photographs. Today I pulled some photo prints from an album and experimented with the concept. It was harder than it looked to line up an old picture in a current context.

A National Day of Service

Ten years ago today I was visiting a home care patient and remember watching with incredulity the TV images of the first attack on the World Trade Centre. Our world has changed much in the ensuing decade with ongoing wars, suspicion, fear and uncertainty.

This week our Prime Minister declared September 11th to be a National Day of Service in Canada. In his words Stephen Harper expressed "hope that this National Day of Service, observed hereafter on September 11, will inspire Canadians to once more show the same kind of compassion to strangers in need, by engaging on that day in charitable activities, fundraisers and community service for worthy causes ...."A National Day of Service will be a fitting way to pay tributes to the 9/11 victims and their families, to honour those involved in the rescue efforts, and to turn an infamous date into a day of hope marked by a communal outpouring of warmth and generosity." 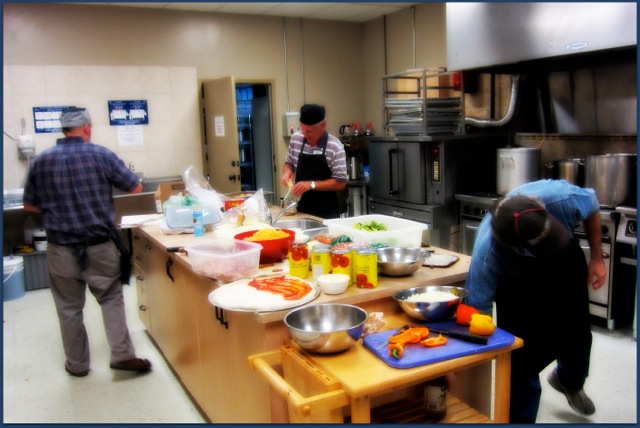 I admire the many people in my community, country and around the world who quietly demonstrate charity and compassion to strangers on a daily basis. We do not have to look far to see those in need. For some time I have wanted to get involved in volunteering in our downtown core among the poor, ill and needy who live there. I worked in the area for five years when I did home care and was sometimes judgemental and cautious around my clients. 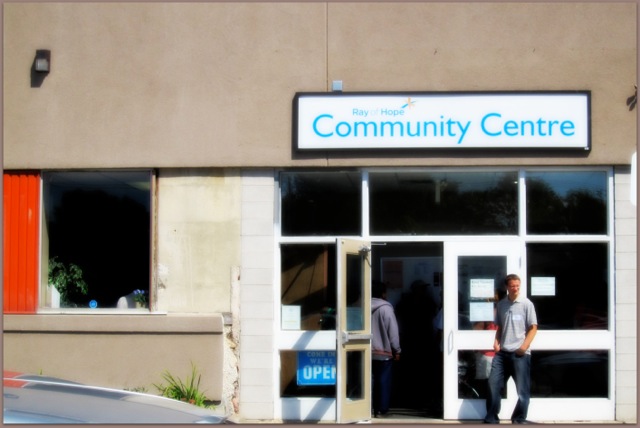 There is a large community centre downtown which provides a daily meal, a food bank, used clothing store, laundry and shower facilities, counselling and spiritual care for the needy. Monday was my first evening to assist with the meal. I was expecting to see the average "street person" there, addicts and homeless types. To my surprise, there were those with physical disabilities, the elderly and single family poor, skilled workers without jobs, and disadvantaged young adults. The centre feeds between 150 to 250 people a day. Various churches and charitable organizations take turns buying, preparing and serving the meals and local businesses and food outlets donate excess inventory. 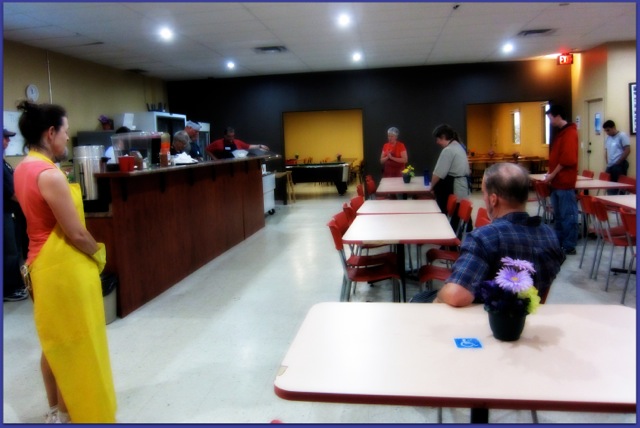 Yesterday, after four hours of hard work, the meal was ready and the doors about to open. The volunteers took time to pray for those about to enter. An hour later, there still was a line to the parking lot of people waiting to enter but they would find physical and spiritual nourishment.

I give credit to the volunteers at this centre who quietly donate many hours each week without the urging of our Prime Minister. They are not fearful of those who are different and they work to break down the barriers which keep the needy from having a meaningful role in our community.

Teach those who are rich in this world not to be proud and not to trust in their money, which is so unreliable. Their trust should be in God, who richly gives us all we need for our enjoyment. Tell them to use their money to do good. They should be rich in good works and generous to those in need, always being ready to share with others.
1 Timothy 6:17, 18
Posted by Ruth at 9:19 am 4 comments:

The Old Man and the White Horse

Our pastor read this story a couple of weeks ago from Max Lucado's book "In the Eye of the Storm". I don't want to forget the wisdom of this parable and wish to share it here.

Once there was an old man who lived in a tiny village. Although poor, he was envied by all, for he owned a beautiful white horse. Even the king coveted his treasure. A horse like this had never been seen before –such was its splendor, its majesty, its strength.
People offered fabulous prices for the steed, but the old man always refused. “This horse is not a horse to me,” he would tell them. “It is a person. How could you sell a person? He is a friend, not a possession. How could you sell a friend.” The man was poor and the temptation was great. But he never sold the horse.

One morning he found that the horse was not in his stable. All the village came to see him.

“You old fool,”they scoffed, “we told you that someone would steal your horse. We warned you that you would be robbed. You are so poor. How could you ever protect such a valuable animal? It would have been better to have sold him. You could have gotten whatever price you wanted. No amount would have been to high. Now the horse is gone and you’ve been cursed with misfortune.”

The old man responded, “Don’t speak too quickly. Say only that the horse is not in the stable. That is all we know; the rest is judgment. If I’ve been cursed or not, how can you know? How can you judge?”

The people contested, “Don’t make us out to be fools! We may not be philosophers, but great philosophy is not needed. The simple fact that your horse is gone is a curse.”

The old man spoke again. “All I know is that the stable is empty, and the horse is gone. The rest I don’t know. Whether it be a curse or a blessing, I can’t say. All we can see is a fragment. Who can say what will come next?”


The people of the village laughed. They thought that the man was crazy. They had always thought he was a fool; if he wasn’t, he would have sold the horse and lived off the money. But instead, he was a poor woodcutter, and old man still cutting firewood and dragging it out of the forest and selling it. He lived hand to mouth in the misery of poverty. Now he had proven that he was, indeed, a fool.

After fifteen days, the horse returned. He hadn’t been stolen; he had run away into the forest. Not only had he returned, he had brought a dozen wild horses with him. Once again, the village people gathered around the woodcutter and spoke.

“Old man, you were right and we were wrong. What we thought was a curse was
a blessing. Please forgive us.”

The man responded, “Once again, you go too far. Say only that the horse is back. State only that a dozen horses returned with him, but don’t judge. How do you know if this is a blessing or not? You see only a fragment. Unless you know the whole story, how can you judge? You read only one page of a book. Can you judge the whole book? You read only one word of one phrase. Can you understand the entire phrase? Life is so vast, yet you judge all of life with one page or one word. All you have is one fragment! Don’t say that this is a blessing. No one knows. I am content with what I know. I am not perturbed by what I don’t.”

“Maybe the old man is right,” they said to one another. So they said little. But down deep, they knew he was wrong. They knew it was a blessing. Twelve wild horses had returned. With a little work, the animals could be broken and trained and sold for much money.

The old man had a son, an only son. The young man began to break the wild horses. After a few days, he fell from one of the horses and broke both legs. Once again the villagers gathered around the old man and cast their judgments.

“You were right,” they said. “You proved you were right. The dozen horses were not a blessing. They were a curse. Your only son has broken both his legs, and now in your old age you have no one to help you. Now you are poorer than ever.”

The old man spoke again. “You people are obsessed with judging. Don’t go so far. Say only that my son broke his legs. Who knows if it is a blessing or a curse? No one knows. We only have a fragment. Life comes in fragments.”

It so happened that a few weeks later the country engaged in war against a neighboring country. All the young men of the village were required to join the army. Only the son of the old man was excluded, because he was injured. Once again the people gathered around the old man, crying and screaming because their sons had been taken. There was little chance that they would return. The enemy was strong, and the war would be a losing struggle. They would never see their sons again.

“You were right, old man,” They wept. “God knows you were right. This proves it. Your son’s accident was a blessing. His legs may be broken, but at least he is with you. Our sons are gone forever.”

The old man spoke again. “It is impossible to talk with you. You always draw conclusions. No one knows.
Posted by Ruth at 8:19 am