Return of the Trumpeters: Part 2 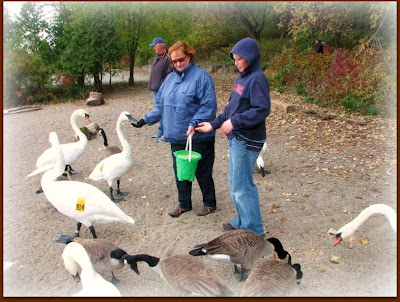 In the last post I mentioned that an adult swan was inspected because it had red on its head and neck. The volunteers wanted to see if it was injured but it appeared that it had been the target of a paintball gun. These birds are very vulnerable because they are accustomed to humans and it was upsetting to think that people could be so uncaring. If people knew the story of these swans, I believe they would be less likely to harass them.

My cousin Sam loves and respects nature and I wanted him to see the birds at this park. We went down on a cold and cloudy Saturday morning and were very fortunate to arrive as the volunteers were about to hand out the daily ration of dried corn. They welcomed Sam and asked him to help feed the Trumpeter Swans. 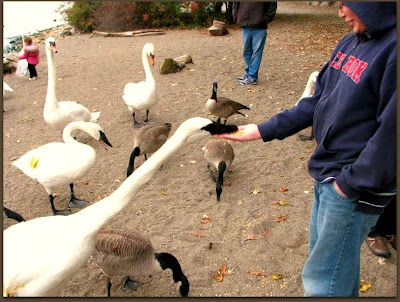 Sam feeds a Trumpeter swan.
Two Mute swans are standing the the background

The woman suggested he approach swan E08 as it was gentle. The swans were hesitant to come to someone new at first but soon took the corn from his outstretched hand. The Mute swans, geese and ducks were anxious for some attention as well but had to wait. Our Sam reminded me so much of Sam Beaver in E.B. White's book "The Trumpet of the Swan". 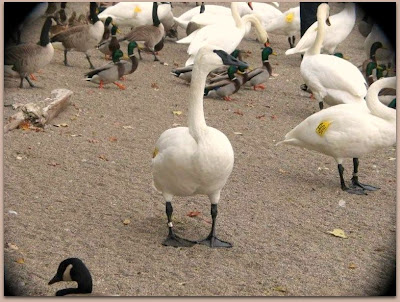 The gentleman who was working with the swans took Sam aside and told him a great deal about the birds. We learned that male birds are banded on the right leg ("males are always right", he said!) and females are banded on the left leg ("lady left"). Four of the five cygnets that arrived from Kirkland Lake this week have been banded and tagged and four of the five are females. 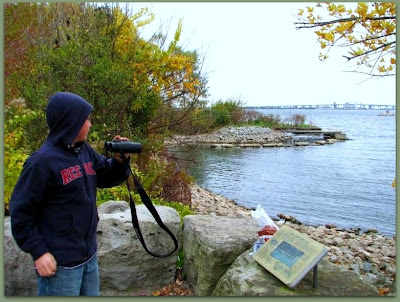 There were other new arrivals in the bay. We saw American Coots, two Red-breasted Mergansers, Bufflehead and Goldeneye ducks, Black ducks and more. Sam has a great eye for birds. He called me over to see a Great Black-backed gull sitting on a shoal. These birds are not common on the Great Lakes. 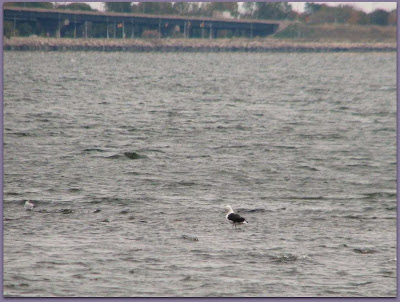 Our schools are doing a much better job at teaching children about environmental issues. But if their families are not interested in the world around them, it becomes less likely that the younger generation will care either. I appreciated the knowledge and enthusiasm these volunteers shared as they involved Sam in their project.

So find a child or two and take them on a field trip even if it is your backyard.
Posted by Ruth at 4:41 pm