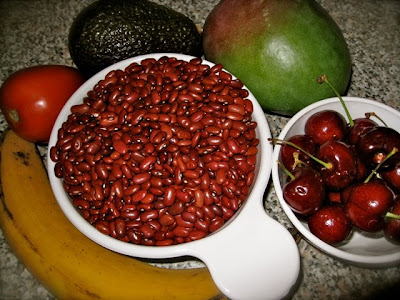 "Let food be thy medicine, and let thy medicine be food."
Hippocrates
I have read numerous books and articles on nutrition and have generally followed the advice of the Canada Food Guide in choosing foods for myself and our family. Our daughters were all sensitive to cow's milk, yet I continued to give them dairy products after they were weaned thinking they would not be healthy without them. From my mid twenties on, I had frequent migraine headaches which would last three days at a time. No medication would relieve them. I had several episodes of back pain as well as inflammatory joint pain on a regular basis.

Just over a year ago I had surgery for a locked knee. The surgeon noted inflammatory damage beyond what he expected for my age. I was off work for weeks and gradually worked back to my normal hours in the following three months. In early April I developed acute plantar fasciitis in my right foot. My knee pain was nothing compared to the searing pain experienced when I walked. Custom orthotics helped somewhat, but I needed anti-inflammatory medication daily along with Zantac to protect my stomach. I then noticed my blood pressure readings were going up alarmingly from their low-normal averages. By mid-summer I was barely getting through a day of work and was unable to walk much outside after work. I did some research and found my anti-inflammatory medication could cause a rise in blood pressure. I decided to try an anti-inflammatory diet to see if I could get some pain relief.

In August I started by eliminating all sugar and refined foods from my diet. Within three days my foot pain was noticeably better. I then stopped eating meat and after a couple days of withdrawal, felt even better. Dairy was last and hardest to give up as I love plain yogurt. Eating a vegan diet with no refined foods allowed me to completely stop all medication and my blood pressure quickly dropped to normal. The night pain which interfered with my sleep cleared up. I went on a trip to the States for two weeks and walked a lot without having a flareup. (I managed to stick to my diet 90% of the time we were gone). I had a set back when I developed septic arthritis in my elbow after a big dental procedure in December. Once that was treated with antibiotics, my pain and inflammation has been diet controlled again. If I cheat, I have more pain. As a bonus, I have had no headaches at all and other hormonally related problems have cleared up completely.

I have not restricted my portions of allowed foods and am deprived at all. When I plan a meal for myself, I imagine a large garden with an orchard and can have anything from it I want. My meals are colourful and satisfying. It is sometimes socially awkward to refuse food and I do not like to bring attention to my preferences. I have eaten fish a few of times since the summer. I had clam chowder in a sourdough bowl on the wharf in San Francisco because I felt it was part of experiencing that city's culture. The food pyramid from Dr. Joel Fuhrman's books is a good model for the kind of eating I need to stick to. It allows some flexibility but is primarily vegetable and fruit based. I stick to the bottom three sections most of the time.

This way of eating is right for me but each person needs to figure out which foods are best for them. We would never think of filling the tank of our car with anything but the proper fuel. Our dog is on a restricted diet due to liver disease and we are careful to adhere to it. Why is it so hard to treat our bodies with the same respect? I have been inspired and encouraged by some bloggers who are long time vegetarians. Melissa (Empress of Dirt) lives in my community and has been very kind and helpful.

Many health conditions can be treated effectively with dietary modifications, yet most people have difficulty following recommendations. Taking medication and vitamins is no substitute for healthy food. David H. Murdock, the 86 year old chairman and owner of Dole foods is a good example of someone who adheres to this philosophy. He says,"No pills, not even aspirin, and certainly no supplements ever enter my mouth -- everything I need comes from my fish-vegetarian diet, which incorporates 30-40 different kinds of fruit and vegetables every week." (source) 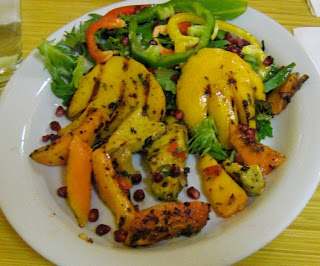 I think it would be impossible to feel deprived eating a diet with that amount of variety.
We ate at a new Central American restaurant last weekend and ordered a few of their vegetarian dishes. From the bean soup to the green salad with grilled fruit, each course was delicious and satisfying. There were eight different fruits and vegetables in the salad on the right alone. (The Becka has written a post about this restaurant on our blog An Insider's Guide to Waterloo Region)

Here are some other resources I have found helpful while changing the way I eat.

The China Study
Physicians Committee for Responsible Medicine
Disease Proof
Posted by Ruth at 7:10 am

Email ThisBlogThis!Share to TwitterShare to FacebookShare to Pinterest
Labels: food and drink, health and wellness