Food, Glorious Food, Don't care what the cook's like...

This is my first cookbook which I received at the age of six or seven. The Becka scanned the cover for me last week and labeled the file
sexist_turning_little_girls_into_housewives_beginners_manual.jpg
She was appalled at the tone and content of the book which suggested that only Mother and Older Sister could work in the kitchen and little girls, not little boys had to learn culinary basics. Father and Boyfriend were the recipients of the fine meals prepared by the women in the family.

I never thought there was anything wrong with this model. Men earned the money and women kept the home. I was 18 years old when I saw a friend's brother-in-law drying dishes in the kitchen. This was so novel (in 1972) that I remember the moment vividly. Since that time, the men in my life, my father, brothers and husband, have proved themselves to be capable with kitchen duties. I took Home Economics classes in middle school and learned to sew, set a table and cook simple meals. Our daughters took Family Studies and Shop in mixed classes where the boys learned kitchen skills and the girls learned woodworking together. 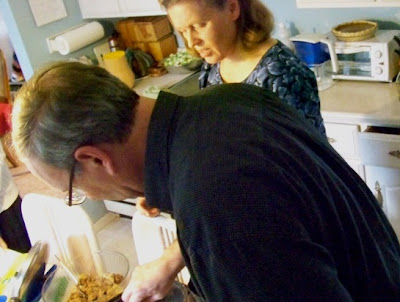 My husband and I preparing Thanksgiving dinner

As women, including myself, entered the working world, roles and relationships with food changed. Busy living requires more convenience and with more disposable income, fast foods and processed foods are eaten more often. Children prefer birthday parties at the golden arches to having a picnic in the park. Treats are useful for pacifying children when we are busy. And food is a stress-reliever, a "drug" of choice.

I was taught that we were to respect our bodies and that alcohol and cigarettes would defile our God-given temple. But no one objected to gorging on food at a buffet or eating foods which were unhealthy. Every day I see the result of a lifetime of poor food choices in patients I work with. Fatty foods in excess cause liver disease in the same way excessive alcohol consumption does. High sodium intake damages tissues of the circulatory system and organs. And excessive weight leads to many chronic illness which are as debilitating as diseases caused by cigarette smoking.

To top it off, we are inundated with confusing and conflicting information on what we should and shouldn't eat. I took vitamin E supplements for years until a recent study showed that the mortality rate of those who took the supplement was higher than for those who didn't take it. Diet fads have swung from one extreme to another. Prescription medications are marketed widely by pharmaceutical companies while the market for vitamins and other supplements has also grown exponentially.

Food, glorious food!
Eat right through the menu.
Just loosen your belt
Two inches and then you
Work up a new appetite...

Where is common sense, intuition, and listening to our bodies in all of this?

Email ThisBlogThis!Share to TwitterShare to FacebookShare to Pinterest
Labels: food and drink, health and wellness