Communicating thank you and goodbye

I received a rose and handwritten card from one of my patients who was discharged from hospital today. 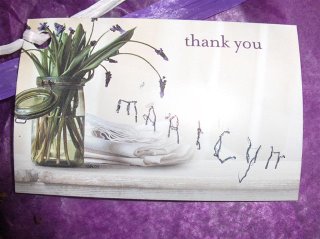 Marilyn had a severe stroke following an acute illness which left her paralyzed and without speech. She is young enough to be part of the work force, far younger than our average patient on the rehabilitation unit. Initially, she would not participate in therapy, so great was her frustration of not being able to communicate. The only word she could express was “no” and her use of it was inconsistent in meaning. She could not move her body and had severe pain when being moved by others. It was so difficult to connect through her suffering and meet her needs.
Now, three months later she is able to walk with help and is going home with her family. She has two words, “yes” and “no”. She can read and has learned to write large letters with her left hand.

Communication is our human connection and without this ability we cannot participate in society. Being able to utter two words correctly and use symbols has made a big difference to Marilyn’s outlook for the future. She will continue her therapy as an outpatient and no one can predict what gains she may make in the future.
Marilyn reminds me to use my words wisely in order to encourage others, and to appreciate the abilities I do have to communicate.
Posted by Ruth at 6:47 pm