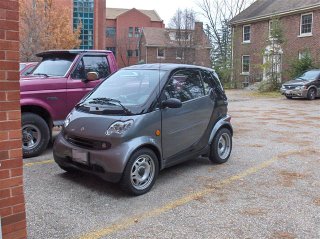 Yesterday was municipal election day in Ontario, when citizens voted for mayors, city council, school board trustees and regional councillors. A common election platform was improved urban transit with the goal of reducing traffic congestion and fuel consumption. Yet we all are increasingly dependent upon individual vehicles as urban sprawl and busy schedules make mass transit impractical. I have taken the city bus to the hospital several times but must allow at least fifty minutes instead of the fifteen minutes it takes by car. Of course, I am required to have my own vehicle as a community therapist and I have driven a minivan for a number of years in order to tote wheelchairs and walkers around with me. I have watched the price of a tank of gas rise from $30.00 to $50.00 or more over the past couple of years and wait for price drops of a few cents before a fill up. In our city, gas is cheapest on Monday evening, and invariably costs ten cents a litre more on Tuesday morning. Right now, gas is cheaper than it has been for many months but we are heading onto the winter season of higher fuel consumption. 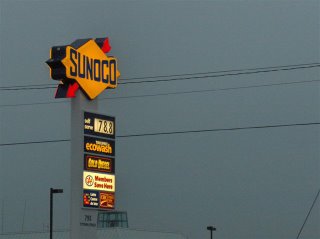 Someone who works at the hospital owns the little Smart car pictured above. I see more and more of them around town and there is a long waiting list for them at the Mercedes-Benz dealership. Tiny cars are common in Europe where fuel prices are significantly higher than in North America, and the trend towards smaller, foreign made vehicles is sweeping Canada. As soon as I cross the US border into Michigan or New York, I notice the increased numbers of large SUVs and trucks compared to here.
My current vehicle is five years old now and I am starting to think about purchasing another vehicle in the next two or three years. I don’t know if I could downsize to a Smart car but I will be looking at something other than a van. By the time I do buy again gas prices may make my decision much easier.
Posted by Ruth at 7:37 am

Email ThisBlogThis!Share to TwitterShare to FacebookShare to Pinterest
Labels: this and that, workplace