Say NO! to Norway Maples 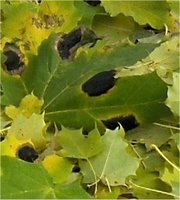 We have three large Norway maple trees on our property which were planted by a previous owner 30 years ago. These non-native trees grow quickly and have very dense foliage, so dense that it is difficult for rain to reach the ground in the summer. We have had them pruned regularly to keep the large crowns away from the house and to let some light in. Their shallow root system makes it difficult for anything to grow beneath them. 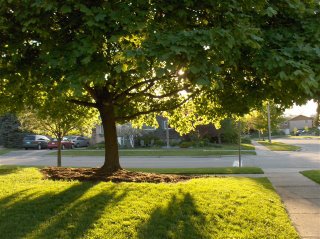 I took a picture of one of the trees in May in the evening light and it looked quite lovely.
For the past several years our trees, and others in the area, have been blighted with tar spot, a fungal disease that develops into round black spots on the leaves. We cannot mulch the leaves and must bag them for the city to dispose of them. This species has been over planted in this city, as it has in many other areas, because it tolerates poor soil, air pollution, and it grows quickly. The fungus is widespread here and difficult to control.
Norway maples produce many seeds which germinate easily. In many areas of North America, they out compete native maple trees in woodlots. It is considered an invasive species in several states. The Norway maple loses its leaves in late autumn, the yellow leaves falling here consistently in the first week of November. The leaf drop is dramatic, and most of the leaves fall off within a few hours.
On November 2nd, I noticed the leaves falling like snow around 8AM and by noon, when I took a picture, 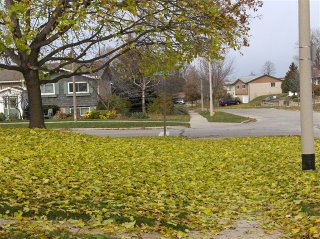 the ground was covered with leaves. That evening we started raking and filled 10 garden bags with leaves from the sidewalk and driveway. We still have to finish raking most of the lawn area.
I would get rid of the trees in a moment if I could replace them with mature red maples. I see the bird nests in the top branches and know that trees take years to establish themselves. All I can advise is to avoid planting these trees yourself if you live in North America.
Posted by Ruth at 8:54 am