Bald Eagle from The Record

Last week a local photographer, David Bebee, captured this image of a Bald Eagle flying near the Grand River along a trail that I frequently walk. The eagles have arrived for the winter and there have been a number of sighting by birders in the area. I have never seen a Bald Eagle in the wild and hope to see one this season.
Last weekend I walked a trail where eagles are frequently reported. I was there shortly after dawn, which isn't too early any more. I was also looking for some different woodpeckers as a Red-headed Woodpecker, Hairy Woodpecker and a Pileated Woodpecker had also been recently reported in our local birding forum. 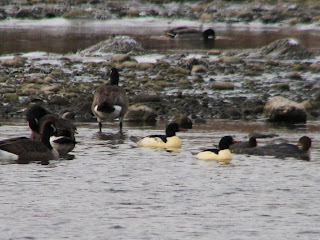 The river was full of birds and at first glance they all seemed to be Mallards and Canada Geese and gulls. But a careful second look revealed two pair of Common Mergansers in the mix. The interesting birds are usually just out of my camera's range for a good picture. 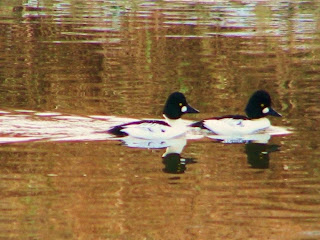 A number of small diving ducks travelled in larger groups of about twenty birds, including these Common Goldeneyes. There were also quite a few Buffleheads around.
There were many Robins and Cedar Waxwings around the berry bushes in a sheltered area below the high river bank. I did see one Hairy Woodpecker and while some dead leaves blocked a clear camera view, I did get an adequate look at the tail feathers to make certain that this was not a Downy Woodpecker. 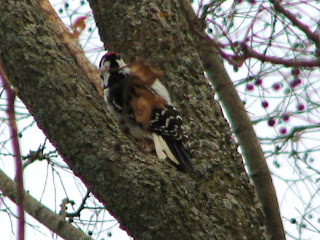 Hairy Woodpeckers are noisy and large in comparison to their Downy cousins and lack the black spots on their outer tail feathers.
I saw a large brown raptor in a willow tree upstream from where I stood. When it flew away, there was an enormous, noisy bird scatter. Another birder who had a scope said it was a juvenile Bald Eagle, one that he had seen several times recently. I do believe him, but I won't count it as my sighting until I can ID it myself. 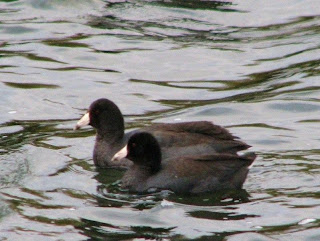 There are some excellent photographs posted on our birding forum by avid birders with expensive cameras. Many of them have been visiting the shores of Lake Ontario and Lake Erie, braving very cold winds to get pictures of wintering birds. I took the picture of these American Coots in the Hamilton harbour a couple of weeks ago. Here are a few links to pictures worth viewing of less common birds being seen in SW Ontario.