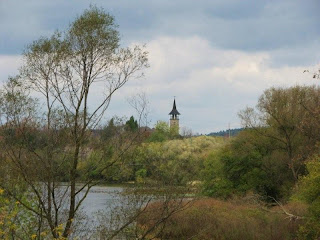 Our region has hundreds of kilometers of fine hiking trails, some local and others that are part of larger networks. The Grand Valley Trail is a marked footpath stretching about 275 km between Rock Point Provincial Park on Lake Erie, south of Dunnville to the town of Alton near Orangeville. It is located in the watershed of the Grand River. Parts of this trail also belong to the much larger Trans Canada Trail which stretches from coast to coast. 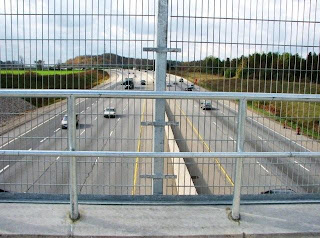 Highway 401 is the major roadway that runs the width of southern Ontario, from Windsor to the Quebec border. It is one of the widest and busiest highways in the world. Half of Canada's population lives along its corridor and that of Autoroute 20 which continues through to Quebec City. 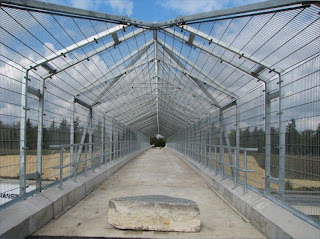 The very first pedestrian bridge across the 401 was opened in our region on October 21 this year. It is part of the the Trans Canada trail system and the Grand Valley trail system and links two neighbouring cities near our large community college. I visited it the weekend it opened and walked a distance on the trail on either side of it. The first picture is of the Pioneer Tower which stands above the Grand River near Doon. The trail passes this picturesque spot and continues to the college and the pedestrian bridge. It then follows a road that leads to the village of Blair where this sheave tower stands (see previous post). The Sheave Tower is even more striking with a background of fall colours. 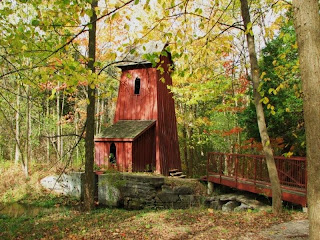 The trail is linear so it is best not to get carried away and walk too far from your vehicle. (My daughters remember a spring day we walked and walked and the return to the car was long, unhappy and blister-producing!) These trails are well groomed and biking would be a great option to cover more territory. I really have to look into getting a bike rack for my vehicle.
The motorists will continue to fill the highway, but hikers now have a safe route above the traffic as they take time to enjoy a leisurely tour of the region.
Posted by Ruth at 12:00 am