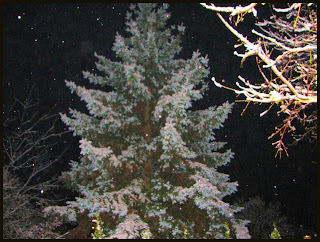 We receive a good amount of snow in our area each winter, but very seldom is it good packing snow. Packing snow is essential for snowballs and snowmen and the temperatures must be close to freezing for it to be heavy and sticky. This is what fell around evening rush hour yesterday making a slippery commute for drivers and a very pretty decoration for the trees. 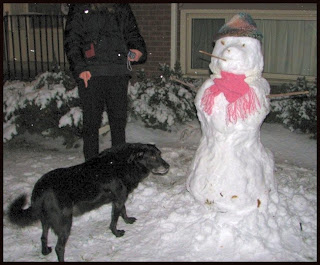 The Becka and I went out to clear some snow before my husband got home and it was very heavy to push and lift the shovel. We decided it would be much easier to clear the driveway and sidewalks by making giant snowballs for a snow man. We have a corner lot and a double driveway so in no time we had our snow man made. 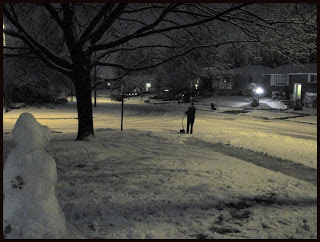 The shoveling was much easier after this. Dakota loves the snow and tried to catch snowballs we threw his way. Snow has come much earlier than last year when we never had snow that stayed until mid-January. The local ski club has been making extra snow for its slopes since the weekend. The white ground does brighten the grey, short November days and snow is preferable to freezing rain. More is on the way today, but the temperatures have dropped and we will have dry, blowing snow. Maybe we will have a white Christmas this year.
Posted by Ruth at 7:33 am