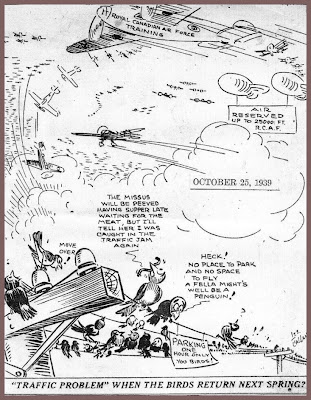 (Click picture to enlarge)
I was looking through Grandma's birding scrapbook which she kept in the 1930's and 1940's and found this cartoon which was published in October 1939. Canada declared war on Germany on September 10, 1939 a day after it was learned that two Canadian women were on the unarmed ocean liner, SS Athenia, which had been sunk by German U-boats. Britain had declared war on Germany one week earlier.

The world has never been without conflict somewhere, but there has never been a war in my lifetime that had an impact as significant as the Great Wars had on the world of my grandparents and parents. 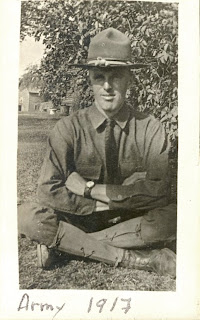 Grandad Devins at about age 22

My maternal grandparents were completing their medical training at the University of Toronto during the First World War and my grandfather's graduation was delayed as he joined the army reserves. I could imagine their dismay at hearing that Canada was once again at war just a short twenty years later.

The war even affected the birds. Airplanes were quite new to Canadian skies in 1939 and the cartoon above reflected the concern people felt about migrating birds sharing the same airspace as RCAF pilots. And this article below from Britain declared the House Sparrow to be Hitler's feathered friend as they ate precious crop seeds from farmers' fields and gardens. In war time Britain, feeding wild birds of any kind was against the law. 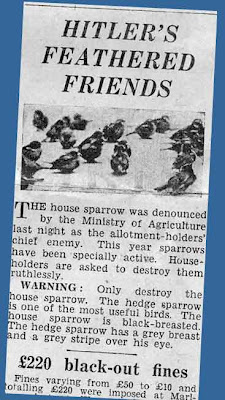 ...something to think about as I go out and refill my bird feeders on this snowy morning!
Posted by Ruth at 10:57 am