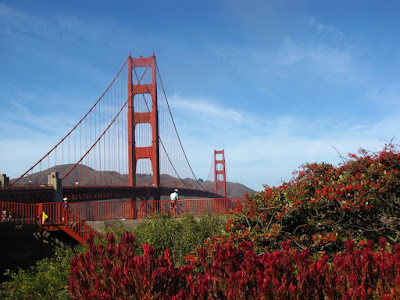 By the end of October, we have usually had a killing frost in southern Ontario and our garden is dormant for the season. I appreciated the beauty of every flower seen on our recent vacation as it will be late April before flowers appear again at home. The tourist stop adjacent to the Golden Gate Bridge had lovely gardens which seemed to have been coordinated in colour with this famous span across the bay. We drove through the San Francisco Botanical Gardens within the Golden Gate Park but did not have time to explore this area. It is definitely a place I would return to see the many themed gardens and the arboretum. 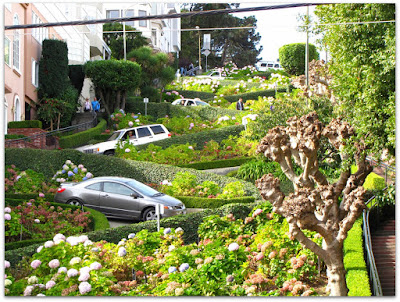 Lombard Street is famous for its block which is considered one of the crookedest streets in the world. Because it was so steep and dangerous for vehicles and pedestrians, eight switchbacks were created to slow traffic. One of the most photographed streets in San Francisco, well kept gardens are contained along the winding roadway. Hydrangea blooms were the featured flower when we were there. 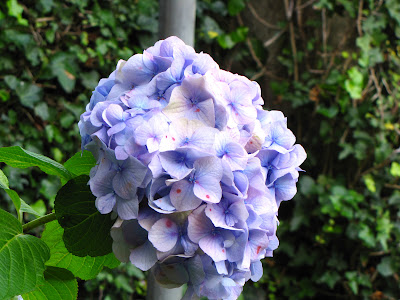 As we drove south to Monterey Bay, we noticed a succulent plant which was used as a ground cover in many places. I thought it was an aloe plant but it was an ice plant which is native to South Africa. Some people consider it to be an invasive species, especially around sand dunes along the coast and it has adapted very well in this climate. 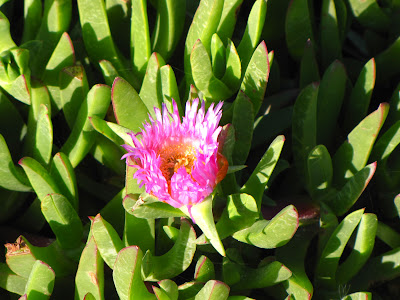 Large plantings of succulent plants can be a good fire barrier because of their high water content. This is important in places where there is a high risk of wild fires. In many places leaves of the ice plants were turning red which looked lovely on the rocks near the ocean. 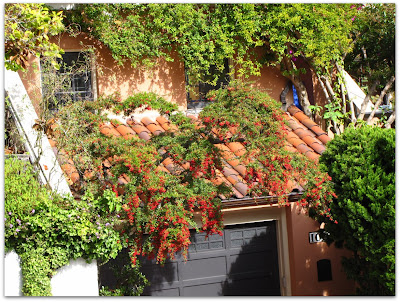 The architecture of many buildings lent itself to a variety of trailing flowering vines. I loved the splashes of colour on roof tops and fences. Our rooftops will soon be adorned with snow but I prefer this image and the warmth it portrays.
Posted by Ruth at 12:07 am