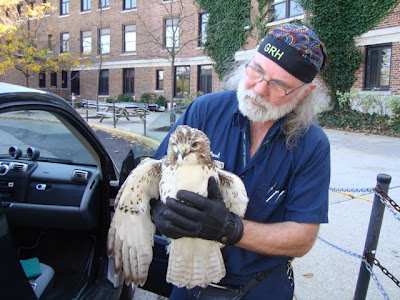 Paul is the plumber at our hospital. I knew him as the person who had a Smart car in the parking lot, but recently found that he also has a keen interest in the natural world around him. On his way to work last week he noticed a young Red-tailed Hawk lying at the side of the expressway which runs through our twin cities. He thought it was dead but stopped, picked it up and continued on his way to work. 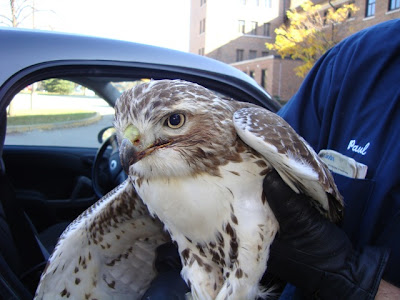 Deb* works at the reception desk but is more at home with her camera taking pictures of birds and wildlife. She is one of those people who brings her camera everywhere she goes just in case she has a great photo opportunity. The hawk was very docile and allowed Paul to handle it while Deb took these pictures. Sadly, I had already left work for the day.

The hawk was alive but sustained an injury to its right eye and had some bleeding from its beak. Apparently it was able to move both wings normally and had no other obvious external problems. Paul called the local Humane Society and they arranged to have the bird moved to Hawkeye, a regional bird control and rehabilitation facility. The plan was to return the hawk to the area where it had been found once it was well enough to be released. 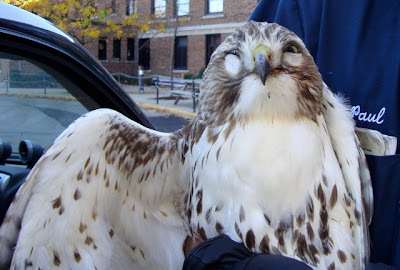 On Friday Paul heard that the bird was recovering but today he came and told me that it had died from its injuries. We have many Red-tailed Hawks in our area and they are seen frequently in the city, often on light standards along busy roads. I drive the same expressway home and recognize the "golf course" hawk and the pair of "land fill" hawks who are seen in basically the same area each day. Large birds which hunt near traffic are at risk for injury from cars and trucks. This hawk must have had injuries more severe than were initially apparent.

Man made structures and machines inadvertently injure and kill many birds each year. But people like Paul, the staff at the Humane Society and Hawkeye do what they can to save unfortunate victims. Hawkeye claims that about 70% of the birds in their care survive. It is too bad that this hawk was not one of them.

*All photos taken by Deb Lehman. Please do not copy or reproduce
Posted by Ruth at 7:52 pm