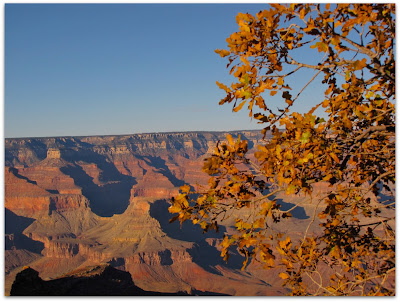 South Rim, Grand Canyon AZ, late afternoon in October
One of my priorities when planning our fall trip to the American south west was to see the Grand Canyon. Gaelyn of Geogypsy had posted so many interesting and beautiful features about the North Rim that I wanted to go to that section of the canyon. However, accommodations at the North Rim close on October 15th even though the park itself is open until November 30th or until snow makes it inaccessible. I realized there was not enough time to make the long trip into Utah. We settled for a few hours at the South Rim and even that was a 600 mile round trip from our hotel in Las Vegas. The day was beautiful, sunny and on the cool side which was good for walking. I took a hundred or more pictures but none of them conveyed the length and depth of the canyon. Every few minutes the colours on the rocks changed as the sun lowered in the sky. 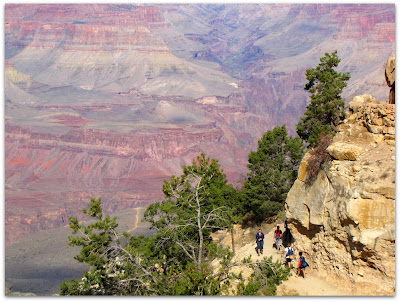 Bright Angel Trail, South Rim, Grand Canyon AZ
The Bright Angel Trail descends over 4000 feet from the south rim to the Colorado River and is used by hikers and mules. This picture shows a little perspective of the size of this part of the canyon. I chose to walk up the Rim Trail which was paved and little wider with rest stops along the way. There were many birds along this trail which were hard to photograph due to light conditions. Deep shadows from the rocks and cliffs covered many trees as the autumn sun was lower in the sky. Mountain Chickadees look similar to our Black-capped Chickadees but their call is lower and a little more hoarse. I had to look closely to see the white stripe above the eye as they feasted on pine cones. Stellar Jays and Juncos were plentiful as were Pygmy Nuthatches that moved quickly around the trunks of the pine trees. 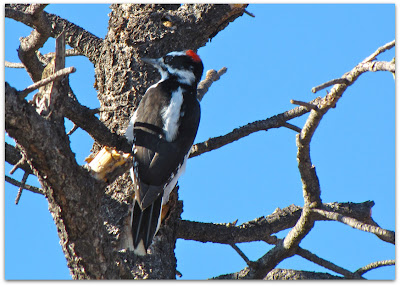 This Hairy Woodpecker looked and sounded like the ones I am familiar with in the eastern part of the continent. Their range is very widespread. We saw many Ravens, a bird we do not have in SW Ontario. Their croaky call was unmistakable, much different than the common American Crow which is abundant at home. 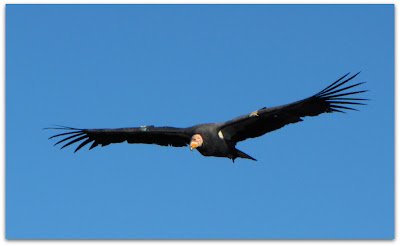 I wanted to see a California Condor and about half an hour before we left, one flew overhead just long enough for me to get this picture. It is the largest flying bird in North America and is endangered, with only 75 of them in Arizona (2009). It created quite a stir and many people were excited to have even a brief glimpse of this scavenger. It rested below the rim on a shady rock, the banding number visible on the wing. (I cannot make sense of what appears to be -0 as a number) 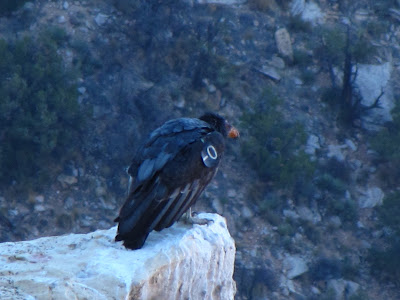 We had only a brief glimpse of all there was to see at the south rim and I would love to return and explore the north rim as well. It was not too busy here in late October, but the weather could turn cold and snowy at any time this far into the season. Our tour guide said they have people sign a waiver after November so they do not have to return their money if they get near the park and the bus cannot continue due to ice and snow.

Have you seen the Grand Canyon, one of the seven natural wonders of the world??
Posted by Ruth at 5:24 pm