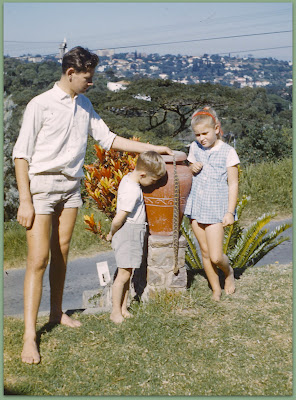 Going through my father's slides, I came across images of events which are forever seared in my mind, memories which became the origin of phobias I have struggled to overcome. From the pictures you can see that we generally went barefoot at home. We played outdoors here daily and I had my first little vegetable garden at this house. I remember only two poisonous snake encounters at home, the first being a black mamba that slithered between my mother's feet when she was raking the grass and the other being this puff adder which was found at the side of the house. From the look on my face it is obvious that I am not impressed with this snake. 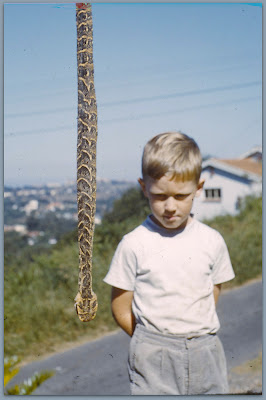 Sandland brother did not seemed inclined to touch the puff adder but when we returned to Canada, he was a great collector of garter snakes and would bring them home from the ravine near our house. My snake phobia continued to grow to the point where I could not even look at or touch a picture of a snake. Seeing the smallest, most harmless snake would make my knees go weak.

I clearly remember my father pretending to charm the dead puff adder. The neighbour attached a string to the snake's mouth and moved it in a puppet like manner. Snakes have their place in the ecosystem, but deadly snakes in urban neighbourhoods were sure to be killed or removed to the snake park. My parents called the snake park to remove the mamba from the hedge beside the house. 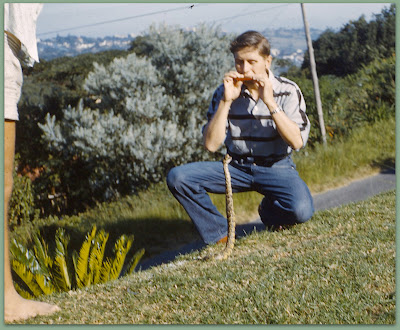 The snake park was a place of horror in my mind yet we would go there on the weekend sometimes and view the pit where a writhing mass of serpents were thrown together. The facility had a very practical purpose too. Venom was milked from the snake's fangs in order to make anti-venom serum. I remember the snake kit we had at home in case we were accidentally bitten. The snake handlers would come out and put on a bit of a show for tourists. 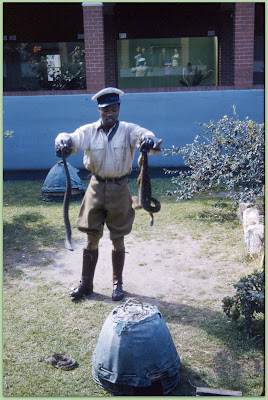 I did not want to pass my irrational fear of snakes onto our daughters and made myself watch television documentaries about them, hiding my distaste for the subject. The Becka had a plastic snake which I loathed, but she was allowed to keep it. I have come across harmless snakes frequently on trails and my heart still pounds when I see one. But the panic I once felt has lessened and while I don't expect I would be able to touch a snake, I have desensitized my fear to some degree.

My other childhood phobia was waterfalls and again I would feel sick if I saw even a picture of one. Dad had his home movies put on DVD and there is a picture of me as a toddler wearing a harness, standing at the unprotected edge of Victoria Falls. Perhaps the seed of fear was planted then and with other experiences it grew much bigger. I don't care for heights, which I think is likely normal, but I can now stand at the brink of Niagara Falls beside the protective fence without feeling like I am going over.

Fear is a protective instinct. Phobias are irrational. Looking and these pictures and remembering helps me understand them.

Follow this link for more Remember Whensday posts.
Posted by Ruth at 8:50 pm