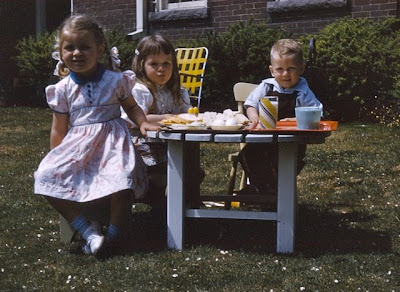 Food, glorious food!
What wouldn't we give for
That extra bit more --
That's all that we live for
Why should we be fated to
Do nothing but brood
On food,
Magical food,
Wonderful food,
Marvellous food,
Fabulous food...
(from Oliver!)

We had a vinyl recording of the Broadway musical Oliver! which we listened to repeatedly as children. I still remember the words to the song Food Glorious Food which was sung by the orphans as they were served a meal of tasteless gruel. Food is such a big part of our lives. Whether we have little or plenty, much time is spent in storing, preparing and eating it. The first picture was taken in Grandma's back yard where we enjoyed many outdoor meals over the years. My brother, cousin and I were at an age where parents tend to coax children to eat. Like many children in our post war generation, we were encouraged to clean our plates and were rewarded with dessert after we finished our first course. Our parents and grandparents had memories of war time rationing and shortages. Our food was always homemade and few processed foods were used. 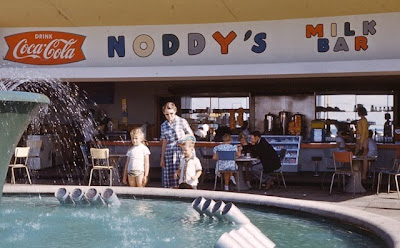 My earliest childhood memories are in Durban, South Africa. Mom would shop at the market and bring home large amounts of fresh fruit and vegetables. On market day she would spend hours cleaning and storing her purchases. She was a fan of nutritionist Adele Davis and always served healthy meals. I remember her taking brewer's yeast in fresh orange juice each morning. Thankfully, she did not make us drink it. Grandma visited us for several months and I remember going out with her to the gardens of a hotel for tea. I imagine she had something to do with us visiting Noddy's Milk Bar and while I don't remember eating there, they likely had a British style tea menu. (I was a great fan of Enid Blyton and her Noddy books). 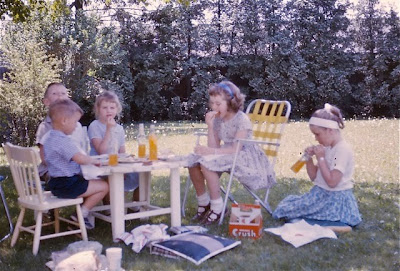 Picnic time with our cousins May 1963
After we returned to Canada, Grandma's picnics were still very popular. We drank orange crush as a special treat and it was the only soda pop we ever had except for the medicinal use of ginger ale for an upset stomach. About this time my dad started giving us an allowance of 5 cents a week. I spent much of it on penny candy at the nearby corner store and for the first time had tooth cavities. We never ate out, but convenience foods such as cake mixes, puddings and TV dinners were becoming more popular. Mom continued to serve healthy foods and did a lot of canning and preparation of food for the freezer in order to stretch the food budget. We drank powdered skim milk, ate cooked cereals and generally had fruit and muffins for dessert.

As a teenager I was introduced to restaurant and fast foods when I went out with friends and would eat at places like Mother's Pizza, KFC, A&W drive-ins, Harveys and Dairy Queen. At home we experimented with home made yogurt and recipes like cabbage rolls and lasagna which Mom learned at an international cooking class in Toronto. Cuisine in the late 60s and early 70s was not very adventurous. Processed foods were more popular but most homes had a stay at home mother who cooked meals from scratch. The average person was not overweight and while dieting was popular enough, the media was not obsessed with nutrition and weight loss strategies.

Remember Whensday
Posted by Ruth at 8:01 am