It's Not Easy Being Green

Grandma had a Frigidaire like the model advertised in this video clip. It was older than me and when Grandma moved out of her big house in 1984 we took the fridge and put it in our basement. We sold it in 1987 when we moved to another house and I wouldn't be surprised if it is still humming along keeping someone's drinks cold on this hot summer day. We are told that old appliances use huge amounts of electricity and efficient models are ENERGY STAR rated by the Canadian government's Office of Energy Efficiency. Being conscientious citizens, we gradually replaced our old appliances with pricey, but environmentally friendly ones. 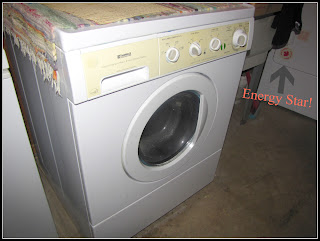 The Becka informed me this morning that our six year old front loading Kenmore washer was making an odd metallic sound. The sound needed a professional assessment and the polite serviceman gave the machine a prognosis of about two months. He balanced the drum on its broken support and I paid him $90 plus HST. Apparently this model has a life expectancy of five to eight years and breaks down on average six months after the warranty period is over.

Green is a very expensive colour. Hybrid cars cost more than any gas savings accumulated over several years. Solar power and wind power options are over-regulated and over-priced. My front load washer supposedly saved me water and detergent, but not enough to afford a new machine in such a short period of time. Is the environment improved with ENERGY STAR appliances stacked up in the local garbage dump? 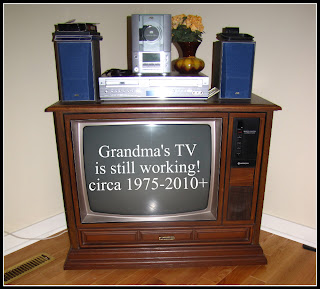 Grandma's colour TV is in our living room. It was over ten years old when she died in 1990. We have used it for twenty years. It has thirty channels and I bet it will last longer than the two year old flat screen TV in the the family room.
Our first low flush toilet was installed last fall when we did major renovations. We are told by powers that be that "the new lower flow toilets have been mandated to save precious and limited resources." Our high boy model is good for bad knees but any substantial deposits in the unit require at least two flushes for complete removal. I am not sure what precious resources it is trying to save. 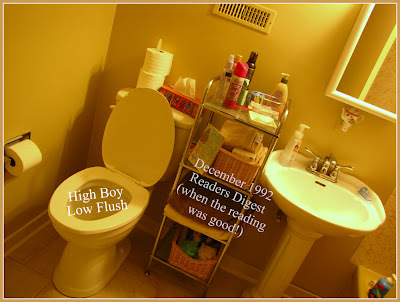 So now we have to shop for another washing machine. Cement washboards are standard in the laundry areas of Mexican homes. Perhaps a portable washboard would be better as it can also be used as a musical instrument. Mom had a wringer washer until the 1970s but they are no longer in production. But I found this very efficient model online. It has all the benefits of a wringer washer and a gym membership. And I would have to take Mondays off work to do the laundry. 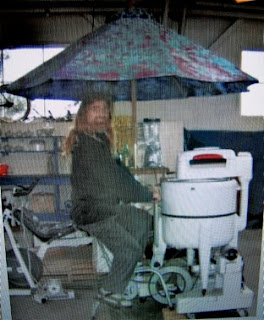 Here is Becka's take on this story. She posted a video of our exact problem.
Posted by Ruth at 7:23 pm