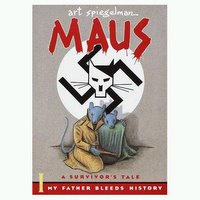 I have seen a number of patients with tattooed numbers on their forearms, engraved during their time spent in concentration camps during World War II. Our community has strong German roots and we also have many people here from Eastern Europe who immigrated following the war. The stories they tell defy imagination and many of them carry emotional scars to this day.
On our psycho-geriatric unit, we have a poor, tormented man of Polish descent who has lost his recent memories following a stroke. Unfortunately, he has retained the memories of his time spent in a work camp in Siberia during the war. All day he calls out, “help me, help me”, and, “I have to go to the bathroom”, or “give me some food”. He thinks the staff members are Nazis. His very supportive family has told us that he was denied food and was not allowed to go to the bathroom for extended periods of time as punishment in the camp. Our physician ordered a urinary catheter for him, in hope that his bladder would not fill and send distress signals to his brain. It did not help. The staff and other patients have felt stressed with his constant calling, but his torment is greater than all ours combined.
The Becka introduced me to the graphic novel, Maus. 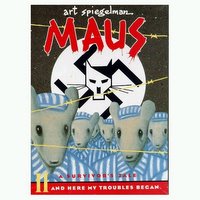 I later found out that my good friend, who is an English professor at York University, has added the two books to her curriculum. I sat down one evening, very tired, and decided to read only a few pages of the first volume. I could not put it down and finished “My Father Bleeds History’ in one sitting. Art Spiegelman brilliantly tells two stories; one of his father’s war experiences and the other of his relationship with the old, sick, cantankerous man. The families of the survivors live with the psychological fallout from their war experiences through subsequent generations.
I highly recommend reading this two volume set and then taking time to reflect on the peace and freedom we enjoy.
Posted by Ruth at 7:24 am