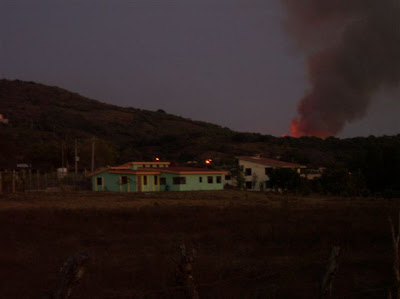 Sugar cane is one of Mexico’s most important agricultural crops. My parents’ home in Jalisco is surrounded by sugar cane fields that are harvested in the spring. My mother took this photo of their home earlier this year as the fields were being burned in preparation for the next day of harvest. Burning the fields gets rid of leaves on the stalks and extra vegetation in the fields making the harvest more compact and easier to transport. The labourers use machetes to cut the canes into one metre lengths and bundle them in precarious mounds onto old panel trucks. The work is hot and labour intensive. The cane is sold to a mill and then the crop is processed in various forms. 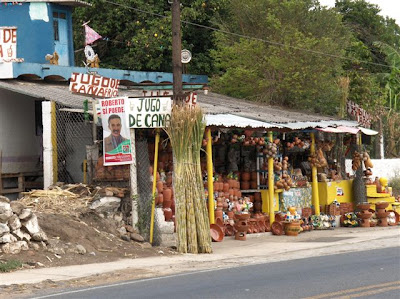 In roadside stands such as the one pictured here, small chunks of sugar cane, marinated in salt and lime juice, are sold in plastic bags. When we climbed the Ceboruco volcano, I found the juicy, sweet and salty canes a fibrous but refreshing snack, although they eventually gave me a sore mouth.
Statistics tell us that the average Canadian consumes 30 to 40 kilograms of processed sugar each year. Sugar is one of the world’s cheapest commodities, and this means that farmers receive very little compensation for their crop and often live in poverty. We give little thought to the source when we buy two kilograms of white sugar for a couple of dollars. In Victorian times, sugar was relatively expensive and was sold in hard cones, 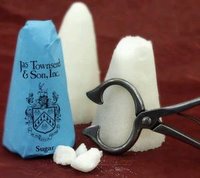 which were grated or broken in chunks with tongs. It would be difficult to over indulge in sugar when it took so much work to use it.
Fair trade products, such as sugar, tea, coffee and chocolate are readily available from our larger grocers as well as in other stores such a Ten Thousand Villages. The farmers reportedly receive more money for their crops and other benefits such as education in their co-operatives. 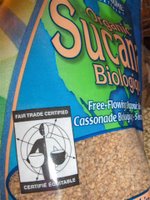 This fair trade sugar I bought cost triple the amount of regular sugar. I use it sparingly and thoughtfully and hope that the people involved in production received a fair wage for their efforts.
At Christmas time, I make these sugarplums, similar to the way they were made many years ago when they were rolled in sugar grated from a cone. Dried fruit and nuts would have been an exotic holiday treat making “visions of sugarplums dance in their heads”.

Victorian Sugar Plums
5 cups assorted dried fruit
1 cup nutmeats
Grind fruit and nuts together in a food processor. Form into one inch balls and roll in granulated sugar. Put each sugar plum into a small paper candy cup. These keep well in the refrigerator for a few weeks.
Posted by Ruth at 8:35 pm