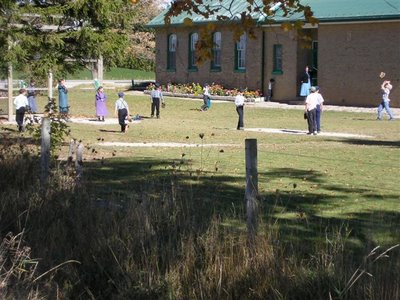 Living in an area with a large Mennonite population brings images of the Amish school shooting in Pennsylvania closer to home. Billions of dollars spent to eliminate terror from abroad cannot stop the madness of unstable men among us.
Amish…pacifists…children…Guns….terror… death…
Something is wrong with the equation.
Last weekend we attended a theatre production of Oliver at the Stratford Festival in Stratford, Ontario. The musical, based on the novel by Charles Dickens, brings to the stage the mistreatment of children and women during the Industrial Age in London, England. The story ended happily for Oliver, but many children suffered and died in the conditions of the time.
Children around the world continue to suffer and die daily from the effects of war, famine, and disease. Many are victims of political and social injustice.
The children of Pennsylvania will be mourned by a nation.
As I contemplate their horror, I must also remember the suffering of children in the world who have no one to mourn their existence.
(Photo of an Old Order Mennonite schoolyard in Waterloo Region, Ontario)
See Via Negativa for another post related this this story.
Posted by Ruth at 6:20 pm