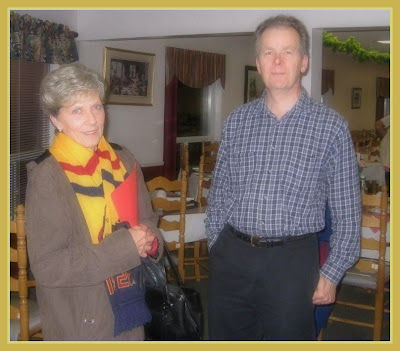 This week I had the privilege of playing the piano for a Christmas carol service at a local retirement home. I have visited this particular facility regularly for at least 15 years and have come to know several of the residents quite well. Many suffer from chronic illnesses and various degrees of disability that make it difficult to get out and about. Others have no family to visit them at special times of the year and the staff, volunteers and those who live there become family to them.

The carol service is always well attended and participation is enthusiastic and heart-felt. Peter, pictured above with Amy, led the singing and Amy recited from memory this poem by Helen Steiner Rice. While it is not new, it does illustrate the true meaning of Christmas. A number of artists have recorded The Christmas Guest and I have added Andy Griffith's version at the end of the post. If you have five minutes and a fast enough connection, listen to the story while you read the words. 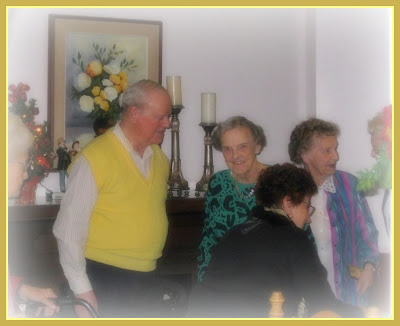 It happened one day at the year's white end,
Two neighbors called on an old-time friend

And they found his shop so meager and mean,
Made gay with a thousand boughs of green,

And said, "Old friends, at dawn today,
When the cock was crowing the night away,

The Lord appeared in a dream to me
And said, 'I am coming your guest to be'.

So I've been busy with feet astir,
Strewing my shop with branches of fir,

The table is spread and the kettle is shined
And over the rafters the holly is twined,

His step as He nears my humble place,
And I open the door and look in His face. . ."

So his friends went home and left Conrad alone,
For this was the happiest day he had known,

For, long since, his family had passed away
And Conrad has spent a sad Christmas Day.

And he listened with only joy in his heart.
And with every sound he would rise with a start 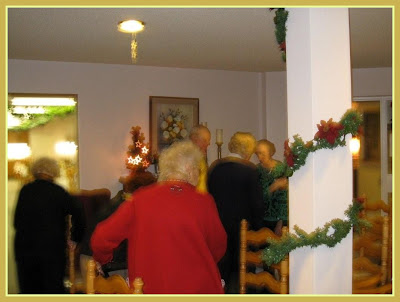 So he ran to the window after hearing a sound,
But all that he saw on the snow-covered ground

Was a shabby beggar whose shoes were torn
And all of his clothes were ragged and worn.

So Conrad was touched and went to the door
And he said, "Your feet must be frozen and sore,

And I have some shoes in my shop for you
And a coat that will keep you warmer, too."

So with grateful heart the man went away,
But as Conrad noticed the time of day

He wondered what made the dear Lord so late
And how much longer he'd have to wait,

When he heard a knock and ran to the door,
But it was only a stranger once more,

A bent, old woman with a shawl of black,
A bundle of kindling piled on her back.

She asked for only a place to rest,
But that was reserved for Conrad's Great Guest.

But her voice seemed to plead, "Don't send me away
Let me rest awhile on Christmas day."

So Conrad brewed her a steaming cup
And told her to sit at the table and sup. 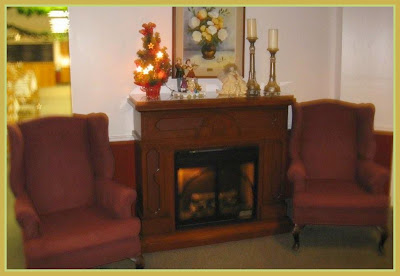 And the Lord had not come as He said He would,
And Conrad felt sure he had misunderstood.

When out of the stillness he heard a cry,
"Please help me and tell me where am I."

So again he opened his friendly door
And stood disappointed as twice before,

It was only a child who had wandered away
And was lost from her family on Christmas Day. .

Again Conrad's heart was heavy and sad,
But he knew he should make this little child glad,

So he called her in and wiped her tears
And quieted her childish fears.

Then he led her back to her home once more
But as he entered his own darkened door,

He knew that the Lord was not coming today
For the hours of Christmas had passed away.

So he went to his room and knelt down to pray
And he said, "Dear Lord, why did you delay,

What kept You from coming to call on me,
For I wanted so much Your face to see. . ."

When soft in the silence a voice he heard,
"Lift up your head for I kept My word--

For I was the beggar with bruised, cold feet,
I was the woman you gave to eat,
And I was the child on the homeless street.

Three times I knocked and three times I came in,
And each time I found the warmth of a friend.

Of all the gifts love is the best,
And I was honored to be your Christmas guest.