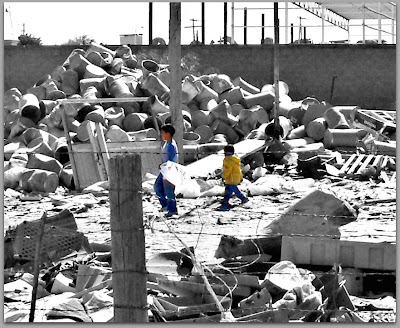 My husband took this picture in Mexico of two young boys as they searched a garbage site for anything of value. Garbage disposal, recycling and other environment initiatives we value in first world countries are not a priority in poorer nations. While people in Mexico often keep their homes tidy and clean, the streets and empty lots in the cities and towns are full of trash. If our modern world was ever to be the object of an archaeological dig in future millennia, I wonder what conclusions would be drawn about our society? 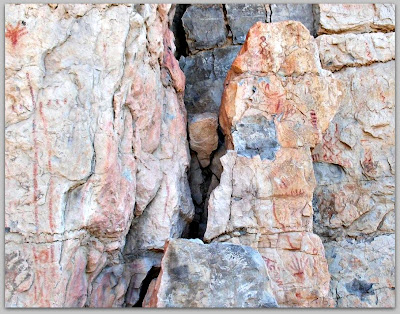 Tim also took these pictures when they went to a desert area near Torréon in the state of Coahuila. They saw caves and rock faces marked with drawings from ancient times. These images have faded over the years and the rock has crumbled and shifted in places. I wonder what stories are told on these walls? 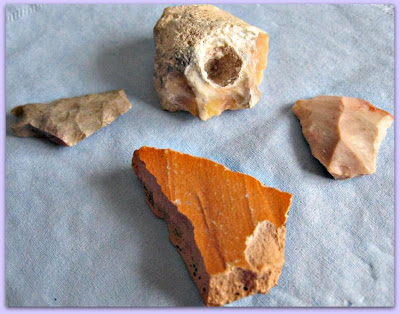 In the same area, these small artifacts were found...a couple of flint arrowheads, a piece of pottery, and a tool that was perhaps used for starting a fire. In all, the evidence pointed to a very simple way of life for these nomadic people, unlike life in the 21st century AD. 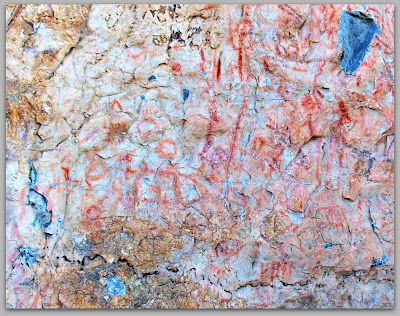 Man always has had a story to share. Modern society has documented itself in countless forms, but will any be as long lasting as these stone drawings? Millions of bloggers publish posts about their every day lives and opinions. These stories may vanish as the internet and computers evolve into some new type of technology. Will our language be understood by future generations?

Why do blogs have such a wide appeal? People have been "blogging" since time began, sharing stories of life, death, faith and hope, passing knowledge and experience from generation to generation.

Do you have a hard copy of your stories, perhaps not on rock, but in something other than cyberspace?
Posted by Ruth at 12:06 am