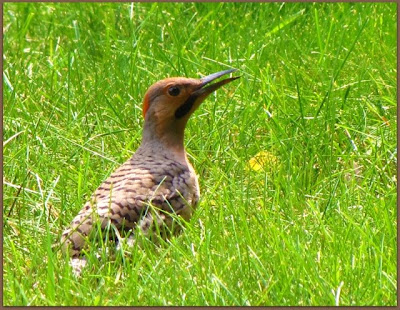 I have taken many pictures this summer but due to ongoing computer woes, have had difficulty editing them and adding them blog posts. Last week, I finally replaced the laptop with Vista OS, truly the worst OS I have ever worked with, and have a sleek new MacBook. Setting up a new computer is rather like packing and moving, and I have spent time sorting and adding files to the new platform. Blog reading and writing have taken a back seat. As well, I have set up a secure wireless network and replaced our eight year old wireless router. I am no longer supplying the neighbourhood with a free wireless signal. I still have to figure out how to get the little netbook online with Windows XP, and The Becka's iPod Touch, but those are minor details. 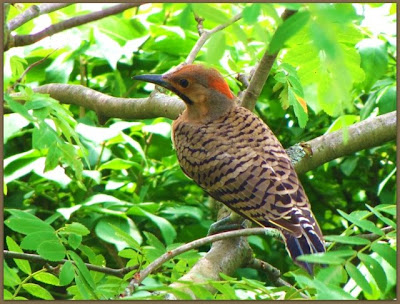 Earlier this summer, I pulled into the driveway after work and noticed a different bird amongst the robins who were digging in the lawn for grubs. I went inside to get my camera and the bird remained while I took a number of pictures. It was a Northern Flicker, a bird I have found very difficult to photograph. There were several of them near our camp on Manitoulin Island and we would scare them off the road when we walked by. They were difficult to see before they flew off. Unlike other woodpeckers, they often feed on the ground and like ants and other insects. I was delighted to find one in our yard and it flew into a tree and posed for more shots. 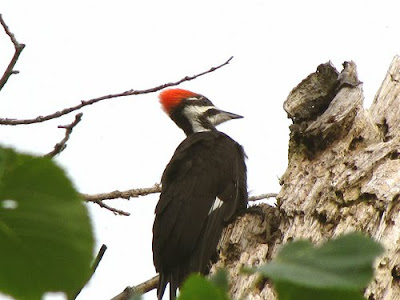 The first bird I saw for my January bird count this year was a Pileated Woodpecker, an unexpected surprise. I see them infrequently but spotted this one on our last morning on Manitoulin Island. As I was taking pictures on the roadside. a car stopped to see what I was looking at. The couple had never seen a Pileated Woodpecker before and were very happy to view this female. 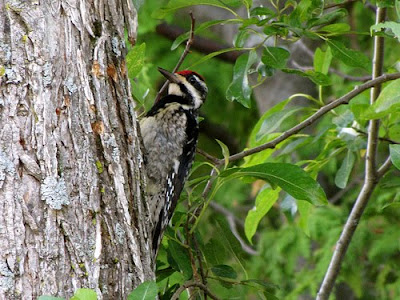 We see Downy and Hairy Woodpeckers frequently in our area, but the Yellow-bellied Sapsucker is a more elusive bird. I have seen two males this year including this one found at dusk one evening. Like the Red-bellied Woodpecker, this bird is not named for its more prominent features, its yellow belly being almost indistinguishable.

I still want to find the other Ontario woodpeckers, the Three-toed, Black-backed, and Red-head species. The range of the Three-toed and Black-backed is north of us but they are sometimes irruptive in the winter and can be found in the south of the province. Maybe this winter will bring them, not that I am rushing the seasons in my quest to increase my bird list!
Posted by Ruth at 8:30 am