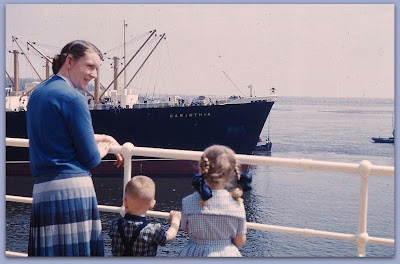 Mom, Nathan and I leaving Canada on the Thorshope

I have started scanning some of my father’s thousands of colour slides which document our family’s history from the early 1950s and onward for about 30 years. Dad has meticulously labelled them with dates and names of people and has organized them in steel boxes under various categories. Many of the pictures are of events I do not remember at all. It seems that my retained memory begins around the age of five years old. Of course, stories have been told over the years and I am aware of them in a second hand way.

My parents travelled to South Africa in 1954 where they worked as lay missionaries. They returned to Canada a few years later with two children. Our family lived in the Pembrook and Lansdowne areas of Ontario and also spent time north of Toronto where both extended families lived. 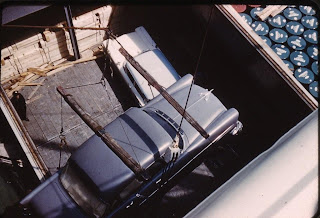 We journeyed again to South Africa in the late 1950’s and then returned to Canada for good in the 1960’s. Travel was always by ocean liner and each trip took about a month. I have crossed the Atlantic three times this way but remember only one journey. My parents packed furniture and other household belongings, including a car, and these came with us in the hold of the ship. The picture on the right is of our car being lowered into the cargo area. These were not luxurious cruise boats. Two trips were made on ships owned by a Scandinavian company, Christensen Canadian African Lines. The boat we took back to Canada the last time was a freighter and we were the only passengers. We were fed well and I do remember falling into a pool on deck, but that is where the perks ended. 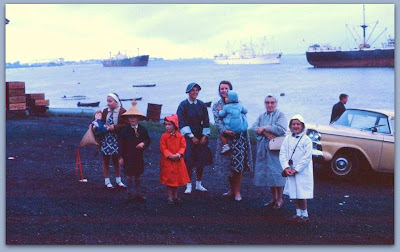 Returning to Montreal, Canada a few years later. Mom and I
are wearing matching dresses and she is holding my brother Philip

When we arrived in Montreal my mother’s family was there to meet us. I remember my uncle arriving at the ship in a small boat to see Mom the day before we disembarked. There was a new toddler to introduce and my third brother was on the way. 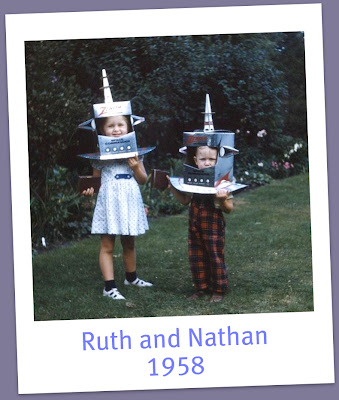 Space Commanders
As children we travelled and moved many times. My brothers were my playmates and companions. The brother closest in age was Nathan and we were best friends in spite of occasional spats. I was shy and he was gregarious and I depended on him in social situations. The family’s love of travel has passed down through subsequent generations and we are currently scattered over the globe. We travel by air to visit, as days of ocean travel like this are a thing of the past.

Gaelyn introduced the Remember Whensday meme to me through her blog. She is travelling to South Africa in March 2010. It would be fun to go again and see this country which has seen many political and social changes in the past 50 years.