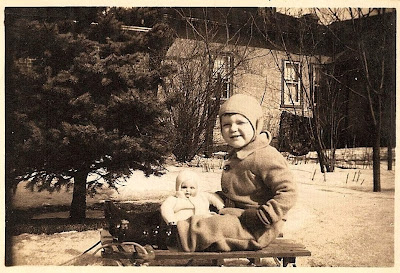 Sandland brother found some old pictures and books in the bottom of a cedar chest which once belonged to our grandmother. He scanned them and sent them to me this week and I do not recall seeing them before. Digital cameras are so pervasive now that many children have thousands of pictures taken of their growing up years. (I do wonder how they will be preserved half a century or more from now) On the other hand, we have only a handful of photographs to document the childhoods of our parents and grandparents and a very few for all the generations before them. I have the privilege of meeting many older people as part of my job. I am very interested in their stories from the past and they are happy to have a listening ear. One lady, now in her mid-80's, told me about her childhood in Poland. 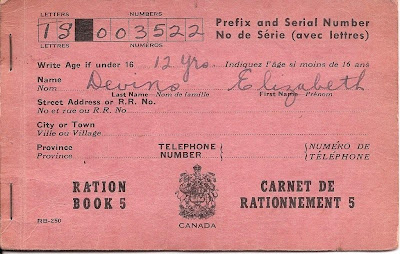 "We lived in a village with hills and woods on either side. These woods were good, with many berries which we gathered for food. One day we heard that the Ukrainians were coming and destroying Polish villages. I ran to the woods with my mother, father and other villagers, hiding there for several days. When we came back to the village, everything was burned to the ground, all our livestock was dead and many people had been killed. We were taken to Germany where we lived in a work camp. I made thread in a factory and learned to sew. After work we formed a choir of Polish and Ukrainian people who lived at the camp. We were very good singers. One day I was walking on the road and jeep stopped in front of me. I was very scared when a man got out. Then he told me he had heard there was a good choir in the area and he wanted to hear them sing. I drove with him back to the camp and he spoke to the director who later allowed the choir to go by truck and sing at Christmas Eve Mass. There were Canadian soldiers at the Mass and I talked to one of them after the service. I asked him to write a letter to my aunt in Canada and to tell her where we were. He did that and brought her reply back to me personally. My aunt arranged for us to come to Canada and we came here before the war was over. I worked as a seamstress and had three boys who all went to university and have good jobs. Canada is such a good country..."

I cannot imagine the horror and hardship of her youth, but she speaks of the positive things in her past which led her to a good place to raise a family in peace and prosperity. 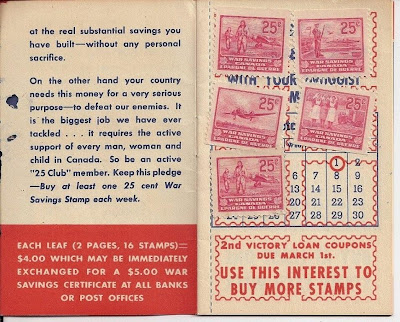 Mom's War Stamps
Those who lived in Canada in the 1930s and 40s were also affected greatly by the war in Europe. Many Canadian troops died and citizens were subject to rationing of food and gas. They were encouraged to contribute to the war effort by buying stamps and bonds. My brother found one of Mom's ration books and her war stamps booklet as well. Mom's experiences growing up during WW II undoubtedly contributed to her present resourcefulness and ability to make a little stretch a long way. She was and is a creative cook and seamstress.

Sometimes I wonder if food and gas rationing and government sponsored savings for children are ideas that would benefit society now? 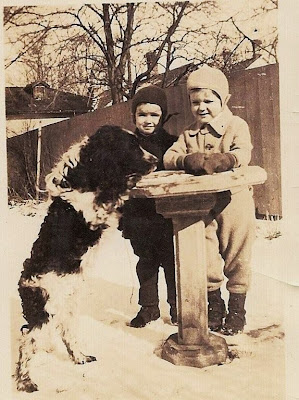 Mom on the right with a friend and her dog

Click here for more Remember Whensday stories.
Posted by Ruth at 6:59 am