New Feathers for the Blue Jays 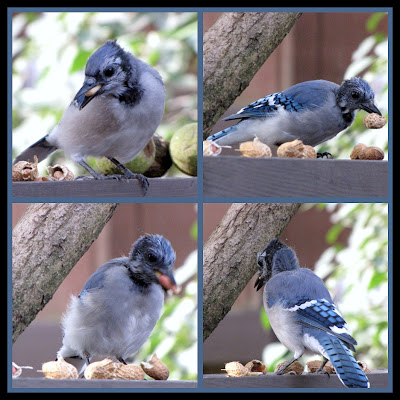 Last week I posted a picture of a pathetically bald Blue Jay who was visiting our deck to get peanuts. Here are some photos taken this weekend of two different Blue Jays. The bird in the top left and bottom right squares has a bit more of a crest and its feathers are filling in nicely. The bird in the top right and bottom left squares is the bird from last week. Its new feathers are beginning to show even though its white belly feathers look somewhat uncontrolled and needing a little "product" to tame them down. Both birds appear healthy and active. I have never seen the Blue Jays bullying other birds and their visits to the yard are short and noisy. They are far less of a nuisance than the squirrels, that is the black and grey squirrels... 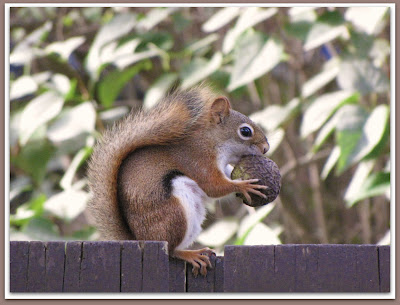 The Red Squirrel is a favourite of mine. We had two Red Squirrels this past winter and spring, Buttons and Buttonette. They had a litter of three, each young squirrel having distinctive colouring. One had a black tip in its tail, another a white tip and the other had a uniform red tail. Only one squirrel has stayed, that being the young female with black striped flanks and a black tipped tail. She is still quite shy but like her parent last year, will come out for Black Walnuts. The Black Walnut trees on the hospital property are dropping fruit now and I bring her home a few as a treat after work. If she is at the feeder and sees a grey squirrel approaching, she chatters loudly and will wait until I come out to shoo the intruder away.

It is a good thing I have a day job as it is hardly profitable spending my days patrolling the back yard deck. I wonder how they manage without me when I am gone?!
Posted by Ruth at 10:45 pm