I travelled to the state of Coahuila in the north of Mexico to spend a few days with our daughter and her husband. My brother Stephen and his family live in the same community as well. The region is not lush and green like Nayarit and the city of San Pedro de las Colonias is hot and dusty. My daughter was excited (for me) that she had seen a Roadrunner a couple of weeks before I came, but there were none around when I was there. Basically there were Great-tailed Grackles, Swallows over the irrigation ditches, Doves, and House Sparrows everywhere. And that was it!

We went downtown one morning to get the mail and run a few errands. I just had my small pocket camera with me as we walked through the main town square which was filled with people. Large trees grew in the square and to my surprise there were many Golden-fronted Woodpeckers calling and flying about. A young bird stuck its head out of the nest hole right above my head. My daughter wanted to leave but I didn't, so she promised to bring me back again. We did return the next day at noon, just in time for an unexpected downpour. I tried to take pictures but the light was poor so I had to extract a promise of a third visit.

It is not unusual to see people taking pictures in Canadian city parks, but it wasn't normal activity in this location. The birds were interesting only to me and I felt very conspicuous pointing my lens up in the trees. I had a perfect shot lined up when a old, thin man tapped my arm and asked for a peso. My only shot of the bird's red cap was blurry but I will keep it so I remember that man. My camera cost less than $400 but that is a lot of money for many people here.

There was a festival of some sort going on that afternoon and many children were dressed in traditional costumes. I looked behind me and saw a line of girls staring at me as I watched the adult birds feeding their young. They were happy to pose for a picture and my daughter explained to them that I was not crazy, even though she didn't believe it herself. 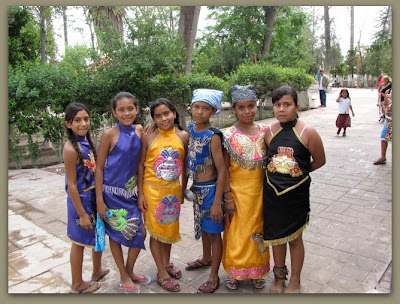 We spent an afternoon in nearby Torreon at the campus of the Universidad del Valle de Mexico (UVM) where my daughter teaches English. The campus is beautiful and we sat on a balcony watching soccer try outs. I heard a lovely, unfamiliar bird song and finally found the singing finches. They look like our House Finches but their song was very different. They were also feeding their young who had already fledged from the nest. 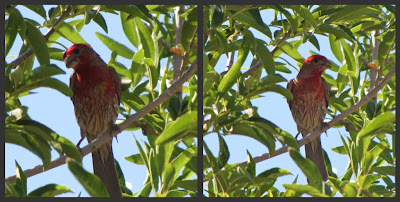 I know there are good birding areas in this state, but they were not in these urban areas. But I was very satisfied to find a new life bird and to see it during the breeding season.
Posted by Ruth at 3:04 pm