My family's home in the state of Nayarit, Mexico is on a bird migration route for the western part of the continent. Mom has counted many different species on the property in the past few years and I looked forward to doing some easy birding while I was there. Most mornings I was prowling around at dawn as my body clock was still on Eastern time. Besides, the days were very warm so the best time to walk was early in the day. The five acre property is situated in the Tepic valley and the Pacific Ocean is just over the mountains. My brother has planted many trees and flowering shrubs and the adjacent properties are mainly sugar cane fields.

While it was easy to see the birds, it was more challenging to get good pictures of them. The Orioles taunted me for three days before I finally took the first photo through the kitchen window. Mom saw the bird land in the tree as we ate dinner and I was able to open the screen without scaring it away. The barn swallows had a nest in the carport and were easier to approach and the Great-tailed Grackles were noisy and bold, just like Grackles in Ontario. The Western Meadowlark hopped from fence post to fence post ahead of me as I tried to get close enough to get a decent picture.

Around midday, a group of small birds would hop about on the grass under the Tabachin tree. At first I thought they were some kind of Chickadee, but the females were very different than the males. They were White-collared Seedeaters, birds which are commonly seen around sugar cane fields.

The most unusual and beautiful bird on the property was the Great Kiskadee. It was quite sociable as it dined on the many, many insects which were around. 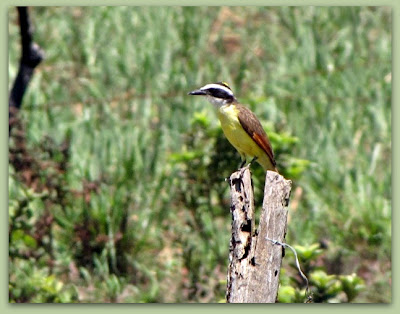 Dad liked to walk in the nearby ecological park in the evenings where a 2 km track circled marsh land and a pond. The concept of an ecological park in Mexico surprised me as in past visits I have not found the country to be conservation oriented. I noticed far less garbage along the roadways this year and responsible environmental stewardship is being taught in schools.
In the evenings, the temperature might have dropped to 28C or so with high humidity, and I had to chuckle at the people walking the track in jackets and track pants. These temperatures were considerably lower than in the afternoon, but not low enough for a jacket in my opinion.
The park had a few caged animals and several interesting wild birds including the very furtive Purple Gallinule. It walked through the rushes and never swam in the water or came into the open for more than a few seconds.

There were many Black-bellied Whistling Ducks and I only saw them in the water once. They preferred to perch on overhead wires and make their distinctive whistling noise. They were beautiful in flight with black and white wing markings. In my mother's Spanish bird guide, they are also called Black-bellied Tree Ducks. I don't know of any other ducks which like a high wire view. 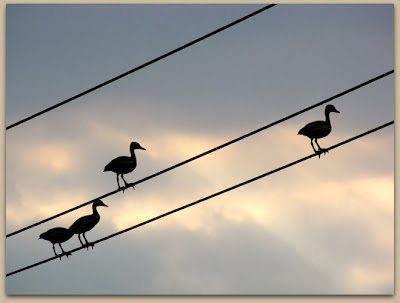 I hope to add a list of birds I saw in this area once I go through all my other photos and look them up in my Sibley Bird Guide. Many birds were unfamiliar and others were familiar but slightly different than related eastern species. Please let me know if I have incorrectly identified any of these birds.
Posted by Ruth at 5:22 pm