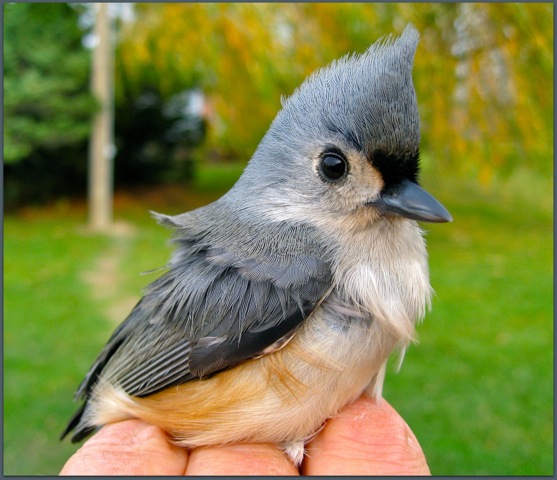 The past week has been extremely busy and included a quickly planned business trip to Canada by my father and brother. We enjoyed their visit and they returned to Mexico at the end of the week. I took a couple of days off work and chauffered them around but the weather was less than ideal and like much of the continent, we experienced high winds and rain.

I have had little time to wander about outdoors so I decided to spend this morning at the bird banding station at Ruthven Park. Fall banding is almost done and will continue only until the second week of November. Dawn is arriving later now with sunrise today at 7:50 AM, so I did not have to get up much earlier than usual to get to the park, which is a 75 minute drive south of our home. Many birds are making the final push to migrate and the banding station is busier than when I visited at the end of September.

One bird I have wanted to see for a long time is the Tufted Titmouse. According to the bird guide, "they barely range into southeastern Canada in the Great Lakes region." I have never heard of any sightings in our city but they are seen occasionally in the Niagara area and the north shores of Lake Ontario and Lake Erie. 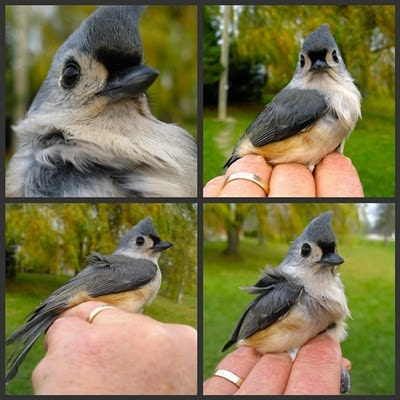 The banding station was busy and I scribed for two banders. Other people were taking the birds out of the nets and placing them in bags to be inspected and tagged. Those of us in the station did not know what was in each bag and it was like opening a gift (which sometimes pooped) each time a bird was extracted. And just for me, there was one Eastern Tufted Titmouse. I asked for a time-out from scribing to take pictures of the spunky bird. It is related to the Black-capped Chickadee but has far more attitude and a much louder voice. It reminds me of a Blue Jay in a small package. I took my pictures quickly because this bird was an aggressive little nipper unlike most of the birds I have held after banding. 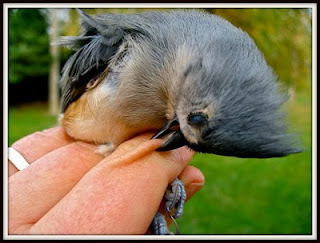 Ouch!...but very worth the pinch!
Here is the link to today's banding report on the Ruthven Park Nature Blog.
Posted by Ruth at 9:12 pm