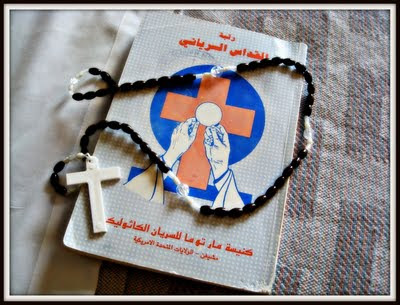 One of my patients is an elderly Iraqi lady who speaks no English. By her bedside she holds this rosary and prayer book for she is an Orthodox Christian, a descendant of one of the most ancient branches of Christianity in the Middle East. She fled her homeland in 1990 with her daughter, son-in-law and grandchildren as her grandson was of age to fight in Saddam Hussein's army during the Gulf War. They waited for a year in a refugee camp in Jordan and then came to Canada where they worked hard to build a new life from scratch. The grandmother's physical needs are great now, but she is grateful when we assist her, kissing our hands in thanks when we understand what it is she wants.

Christians in Iraq are persecuted for their faith, more so now than ever since the current invasion of Iraq. Our newspaper featured this article yesterday and it is pasted at the end of this post as the link may become obselete quickly.

Two of the children in my Sunday School class are from Eritrea.  While teaching in a Christian church in that country, their aunt was arrested and remains imprisoned at this time. Her young nephew told me today he hopes he gets to see her again.

As we sang Easter hymns in church this morning, I wondered how many would gather for worship if our lives were at risk for the faith we proclaimed so openly on this holy day? Would I be there? 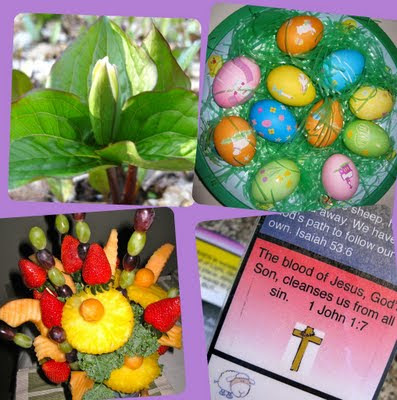 Christians remain besieged and fearful in Iraq at Easter

BAGHDAD, IRAQ — Iraqi Christians marked a restrained Easter weekend as fear of attacks kept many from openly celebrating their most sacred day of the year and church officials urged them not to give up on the country.
At Our Lady of Salvation, where gunmen and suicide bombers killed 52 worshippers and guards last October, the church was tightly locked, guarded by Iraqi police who said the doors would be opened only moments before the Saturday evening mass.
“It’s more like a museum than a church,” said one of the police officers. He said they tried to keep out those who were simply curious or, he implied, there to gather intelligence.
Only the arch and cross on the church roof were visible behind 10-foot high concrete walls like others that have turned most churches in Baghdad into miniature fortresses.
“Our churches have become like prisons,” says Monsignor Pious Casha, who arrived at Our Lady of Salvation during the siege moments after Iraqi special forces stormed the church. “The barbed wire and concrete are new. Yes they protect the churches, but they make the worshippers spiritually constrained.”
Monsignor Casha, at St. Joseph’s Catholic Church in the relatively affluent neighborhood of Mansour, said the church had been packed on Palm Sunday a week ago with families doing a procession through the streets around the church.
He said, however, that of the 1,300 families that had been in his parish in 2003, only 500 remained—with a few more leaving every week—most of them to Turkey.
“It is a disease of emigration,” he said.
With traditional escape routes closing as more countries in the Middle East are engulfed by unrest, Turkey has become the default route for Christians fleeing Iraq. Of more than a million Christians in Iraq before 2003, there are believed to be only about 650,000 left. The exodus has raised fears about the future of Christianity in the region where it first took root.
Casha said his Easter Sunday sermon would urge parishioners to remain in Iraq.
“Let’s stay here and try to build our country—everything old is finished,” he said.
He said there had been no recent attacks specifically targeting Christians after a wave of them claimed by al-Qaida early this year. But there continue to be threats, he said, pulling out of his desk drawer bullets wrapped in black tape that had been placed on the doorstep of a Christian family recently as a warning.
“I think they wanted the house,” he said.
In Baghdad and in the northern city of Mosul, the site of biblical Ninevah and the burial place of the Prophet Jonah, many Christians were watching mass on television rather than risking public celebrations.
Iraq’s state-run television broadcast evening mass live from the half-filled Virgin Mary church in Karrada.
“I ask you to be patient because the coming days will not be easy,” Cardinal Emmanuel Delly, the Patriarch of Babylon, told the small congregation.
Like other minorities, Christians, because of their small numbers, have been disproportionately hit by violence in Iraq. Many blame the United States for the chaos that replaced the relative security they enjoyed under Saddam Hussein’s repressive regime.
Some who remain are a testament to resiliency.
At St. Joseph’s Church in Mansour, among the faithful trickling in was Vivienne Matti, whose husband and three children were killed four months after Saddam was toppled when American soldiers, thinking they were a threat, fired on their vehicle.
Matti’s youngest child, six years old, had been seated in her lap.
“I’ve seen death myself. I’m not afraid anymore,” she said.