He rises and begins to round,
He drops the silver chain of sound,
Of many links without a break,
In chirrup, whistle, slur and shake. 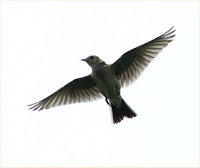 For singing till his heaven fills,
‘Tis love of earth that he instils,
And ever winging up and up,
Our valley is his golden cup
And he the wine which overflows
to lift us with him as he goes.

Till lost on his aerial rings
In light, and then the fancy sings.

One of my favourite pieces of music is Ralph Vaughan Williams' The Lark Ascending. The composer was inspired by the poem above and it was included along with the original published music. The beauty of the violin solo as it represents the ascending skylark represents a joyful freedom of spirit that I find very moving.
Bird songs are rare around here right now. Other than the chirping of sparrows near feeders, and the cheery chickadees in the bushes, the mornings are white and silent. Many musical composers were inspired to imitate bird melodies in their work. Vivaldi's The Four Seasons is a musical journey through the year. He wrote a sonnet to accompany each section. Spring's sonnet describes the music and each element can be heard by the listener.

Springtime is upon us.
The birds celebrate her return with festive song,
and murmuring streams are softly caressed by the breezes.
Thunderstorms, those heralds of Spring, roar, casting their dark mantle over heaven,
Then they die away to silence, and the birds take up their charming songs once more.
On the flower-strewn meadow, with leafy branches rustling overhead, the goat-herd sleeps,
his faithful dog beside him.
Led by the festive sound of rustic bagpipes, nymphs and shepherds
lightly dance beneath the brilliant canopy of spring.
Doves, cuckoos, and nightingales are well represented in classical music. Another favourite piece I have enjoyed from childhood is Peter and the Wolf. Sergei Prokofiev wrote this children's story which is spoken by a narrator and accompanied by the orchestra. Each character is represented by an instrument and a repeated melody. The flute sings the bird's song and the oboe is given the duck's tune.
The snow is falling and the wind is howling outside tonight as the temperature plummets below zero. I can listen to the songs of spring and birds on some of my favourite CDs and imagine the warmth and sounds of a coming season. 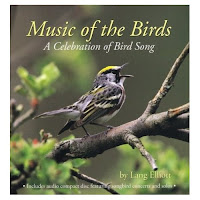 On another note...I found this recommended book Music of the Birds: A Celebration of Bird Song with CD.
From the description at Amazon...

The book examines bird song from two main perspectives: scientific and aesthetic. Elliott dispenses solid, basic science on why birds sing, the functions of specialized bird vocalizations, and other topics that have been examined by ornithologists. He also discusses how bird songs have influenced poets, with many examples from the writings of some of the greatest of all time. Indeed, it is not difficult to see how the songs of such great singers as thrushes, larks, or others inspired writers as diverse as Shelley, Whitman, and Thoreau.

Aside from the text, the book is graced with spectacular photos, virtually all of them taken by Elliott and in magnificent color, of singing birds. Any birder who knows the difficulty in spotting such songbirds as warblers will be astonished by Elliott's photos of these and many more, in the act of singing no less! As if this were not enough, tucked inside the back cover you will find a compact disc of bird songs also produced by Elliott and technically superb...

(Photo of lark-source unknown)
Posted by Ruth at 7:27 pm