Mystery of the Missing Suet

I have been putting a suet mixture out on the deck for the birds since the weather became colder. The recipe I have been using came from The Egret’s Nest. I mix the crunchy peanut butter and the lard together and it smells so good, just as if I am beginning to make peanut butter cookies. 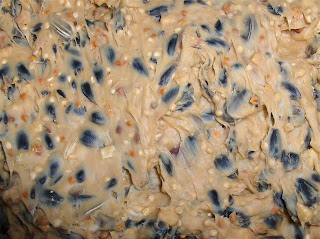 I LOVE peanut butter, and I could easily eat it at every meal. The oats and flour continue to add to the cookie like texture, but then I add a good amount of mixed bird seed to the mixture. I have been freezing it in 3 cup yogurt containers and putting it in a very makeshift basket, suspended by wire hangers on a hook. I am seldom home during the day, and have little opportunity to see any action at the feeders. On Thursday morning, I put 3 cups of fresh “bird suet” out before I went to work. The previous batch had lasted over a week. 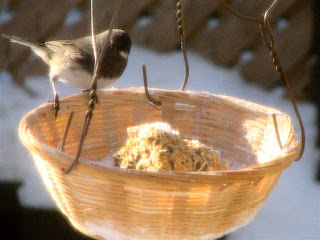 The juncos are quick to hop into the basket and they line up in the lilac bush for a turn at the tasty treat.

When I returned home that afternoon, the basket was on the deck floor and all the suet was gone. I could hardly imagine that it could have been eaten that quickly by the birds, or even a gang of squirrels. The Becka and I dug through the snow to see if we could find even a trace of it, but there was nothing left at all.

This morning dawned bright and sunny. I went out in the yard with our dog and checked the feeders which were covered in a few inches of new fluffy snow. The dog had his constitutional and when I went to clean it up…well, it consisted of…birdseed.

We have been trying to watch our eight year old mixed breed’s weight, limiting his treats and making sure he has regular walks. And to think he gobbled down at least one cup of lard and peanut butter, along with a lot of fiber! 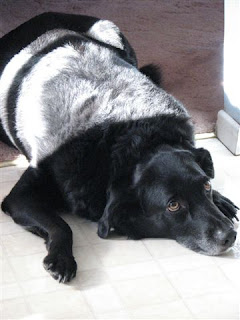 He knew he was in “the doghouse”, but likely didn’t relate our scolding to his indulgence two days ago. It was also fortunate that he digested it, rather than throwing it up on a rug. I really have to find a better way to put out the suet so it cannot be tipped by the squirrels or the dog.

I have copied the recipe onto my recipe blog just in case I ever lose the link to The Egret's Nest. The peanut butter is really popular with all kinds of feathered and furry critters, and with a few modifications, I think I could serve it to my friends as well!