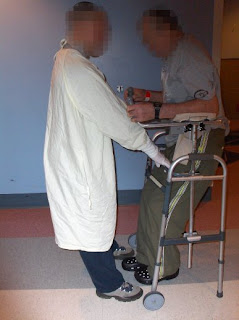 Working in a hospital, one sees a constant but changing battle with various infections. This is the season for like viruses and influenza. Several nursing homes and hospital floors are quarantined now to slow down these rapidly spreading diseases.

More sinister are the antibiotic resistant infections such as MRSA and VRE. Both hospitals in our city have many cases right now and staff has to take extra time to gown and glove, disinfect and wash each time a patient requires care. Usually, patients with these infections are placed in isolation rooms, but there are so many right now, that four bed wards are being used to isolate groups with similar infections.

In most cases, the antibiotic resistant infections are of minimal risk to staff, but for the elderly and ill, they can be lethal. A new strain of MRSA, community acquired, CA-MRSA, is being seen with increasing frequency in young and healthy populations. This infection has spread quickly in sports teams and in gyms and is characterized by boils and similar skin infections. It has the potential to be life threatening as well.

The overuse of antibiotics has contributed to the development of new strains of bacteria. It is increasingly difficult to find new antibiotics before the bacteria have modified themselves again. Antibiotics are of no use against viral illness like the common cold, yet people often demand a pill from their doctor when they get a mild infection that will run its course without treatment.

When penicillin was discovered, it seemed that the battle with infectious disease had been won. My mother’s brother died of meningitis at the age of three in the 1920’s and his life would likely have been spared with antibiotics. Diseases like tuberculosis and various venereal diseases that were scourges in the 19th and early 20th centuries have become highly treatable. Tuberculosis is re-emerging though in an antibiotic resistant form.

The media can sound a fearful alarm causing unnecessary panic at times. Diseases are part of nature, and all living things are subject to them. We have so much more understanding of how illnesses spread and are able to take precautions to protect our health. Most of us have a healthy immune system, and this is our first line of defense. Things like stress, fatigue, poor nutrition, and lack of exercise cause our immune system to function poorly. When I do get sick, I can usually link my illness to a time of stress, overtiredness, or eating excessive sweets and processed foods. Good hand washing habits are also essential and the sharing of personal items is not a good idea.

I have had several patients who developed sepsis from a small skin infection and went on to rapid multi-organ failure. They spent weeks in ICU on ventilators and dialysis, sometimes losing a limb to stop the source of the infection. We see them for rehabilitation to get their stiffened and atrophied bodies moving again.

We occasionally are made to watch the most depressing films about the spread of infection as part of staff education. I try to keep a balanced perspective about the risks, which are really quite small for an individual.

Marie Currie, a pioneer in medical physics, said so wisely,

"Nothing in life is to be feared, it is only to be understood. Now is the time to understand more, so that we may fear less."