The Great Game of Canada 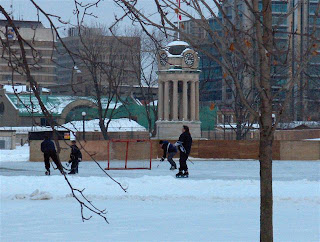 Hockey is ’s national sport. Now that we have cold weather, outdoor rinks are flooded each night by hardy volunteers for those who want free outdoor ice time. Two large rinks are maintained by the city in the downtown park, one for hockey, the other for pleasure skating.

The Irish game of Hurley was brought to in the early 1800s. It was a type of field hockey and it moved to ice surfaces in the winter as the ground was too rough for play. The new game was called Hurley on Ice. Skates were strapped onto boots in the early years of the game and skates as we know them today did not appear until the early 20th century. The game became known as hockey in the later part of the 19th century and it spread across most regions of . Over the years there were changes in equipment and rules, and various leagues were formed, the most famous being the National Hockey League in 1917. 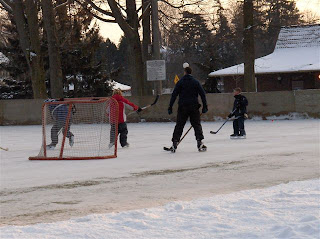 Hockey at it best is a spontaneous pick up game, played by young and old together. In the Mennonite communities, nightly games are played on cleared ponds with energetic enthusiasm. Road hockey is popular on suburban streets as youngsters play with a net, ball, boots or inline skates. Wayne Gretzky, who grew up in a community close to here, practiced skating and stick handling for hours each day in a backyard rink. This spontaneity demonstrates the true heart and passion of the game.

My husband is a goalie and plays in an Old Timers’ league three times a week. (Old Timers starts at 40 years of age). He and other aging baby boomers hit the ice in the evenings and weekends and try to replay the game of their youth. Earlier this month, one player on his team had a heart attack and died on the ice. Too many of the men are out of shape, overweight, and smokers. They do not warm up properly and ignore warning signals such as breathlessness and chest pain. The quick energy required during intense peaks of activity followed by frequent bench breaks with no activity is very hard a deconditioned heart and body. 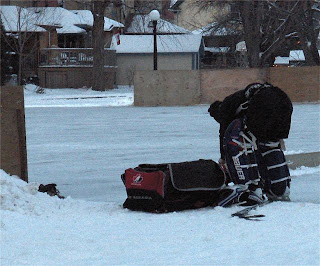 I do not enjoy big league hockey at all. The salaries paid to professional players in all sports are obscene, and the antics and behaviour of some players abhorrent. Hockey did not originate as a spectator sport, but as a sport of participation and community. It was not meant to be franchised in Florida, Phoenix or California. This is a game of the great white north.

After work I walked through the park and watched the skaters, a father with his son and friends, and young goalie trying out new equipment, all playing for the love of the game.

Hockey captures the essence of Canadian experience in the . In a land so inescapably and inhospitably cold, hockey is the chance of life, and an affirmation that despite the deathly chill of winter we are alive. ~Stephen Leacock

I enjoyed your hockey piece about what hockey is and where is really started. I like to think that it is found on all the backyard rinks and outdoor community ice rinks in Canada. The joy of kids lacing up and playing their heart out just for the fun of the game.
There's a lot to be said about watching kids take his/her first steps on the ice or watching 2-3 kids skate hours on end and come in with red cheeks to only head back out for more. I like to think that this is its purest form of hockey.
This is what I try to encourage and develop in our neighbourhood by holding a 3on3 backyard hockey league for kids ages 7-11. Looks like it's picking up....
Thanks for your article.
Francois
Orleans, Ontario
www.3on3backyardhockey.com